“BLAGOJEVICH I know, but I mean he, he wants to be
able to have some deniability on it, I guess.

BLAGOJEVICH But this is what they’re tellin’ me.
And so he reached out to Tom Balanoff at
SEIU and, uh, Balanoff Tuesday night
told me that Barack had called him
Monday night and then, uh, Balanoff
hustled into my office Thursday, yes-,
the day bef-, yesterday, you know, to
talk about this and that he really wants
her, and Andy Stern and Tom were in my
office Monday. I think I told you that.

BLAGOJEVICH To get a sense of where I was. So we’ve
done this. So Thursday Balanoff came
back with a message directly from Obama,
Valerie Jarrett.”

“YANG But, but it seems to me, John Harris,
that’s a good, that’s a great, that I,that job sounds really good. But, um,
can’t Balanoff and Stern just make him
that themselves?
HARRIS Right, but, but the point is they, they
can, but then it’s a, then it’s a, it’s
a big, it’s a giveaway for them because
they…
YANG Yeah.
HARRIS …they have people…
YANG Yeah.
HARRIS …in their unions to do it.
YANG Yeah, yeah.
HARRIS So, they’d wanna par-, par-, you know,
they’d like to trade that for something
from Obama. Sayin’…
YANG Yeah.
HARRIS …okay, we can get Rod to do X…
YANG Right.
HARRIS …you do Y for us…
YANG Right.
HARRIS …and we’ll, we’ll, we’ll sat-, we’ll,
we’ll solve your, we’ll solve your Rod
problem.
YANG It’s like, it’s like a three, it’s like
the three way trade involving…
HARRIS It’s a, it’s a…
YANG …Jason Bay and Manny, Manny Ramirez.
HARRIS …right, it’s a three…
BLAGOJEVICH That’s right.
HARRIS …it’s a three way deal…
Right.
HARRIS …and it gives Bar-, Barack the ability
to stay out of Illinois politics if
that’s his… YANG Right.
HARRIS …code word for, ’cause he’s a got a
buffer. So there’s no obvious quid quo
pro for Valerie.”

I received this in an email sent from a nice lady, part
of the “Greatest Generation.” I have seen the photos of
Blagojevich and Obama before, but they are worthy of
presenting again, lest we forget.

Now pay close attention!  We don’t want to have to say this more than once.   It’s very simple . . . we’ll illustrate.  Remember, you know nothing.


These two? They don’t know each other! They said they didn’t. 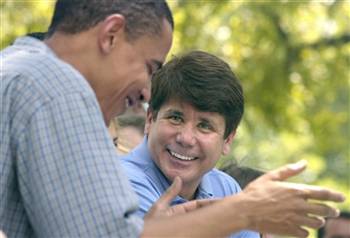 The fellas in the foreground of this picture? Well, what fellas?  We don’t see nothing!

Go to your eye doctor…your eyes are lying to you!  Ca’pish?

Remember Jimmy Hoffa!  He knew too much and now, well, now no one knows where he is. Is the big picture clear?  Not these pictures! Remember, You’ve already forgot them…

Now, ain’t that simple? They don’t know each other, ’cause they said so! and neither do we!
And don’t forget it!

The impeachment trial of Governor Rod Blagojevich of Illinois
began on Monday, January 26, 2009. Governor Blagojevich was
not present at the trial Monday, instead he continued his
road show antics of pleading innocence and being the victim
of a witch hunt. Anyone that followed the Tony Rezko trial,
read the indictments of Rezko, Stuart Levine, Dr. Robert
Weinstein and a host of others and compared those revelations
to the details of the Blagojevich criminal complaint knows
of Rod Blagojevich’s deep involvement in Chicago pay to play
politics. It is also clear that the case against Blagojevich
is not simply about selling Obama’s senate seat, but about
many years of corruption that ties Blagojevich to many Chicago
corruption figures as well as Obama.

One of the more flagrant cases of corruption involving
Blagojevich and Obama was their part in rigging the IL Health
Planning Facilities Board. Obama was in the IL Senate at that
time and was instrumental in reducing the number of members
from 15 to 9. Why is that important? Because the governor, Rod
Blagojevich, had the power to appoint up to 5 members.
Blagojevich, in cahoots with Rezko and Levine, appointed
members that would follow their wishes and consequently Obama and
Blagojevich received campaign contributions from the new
members. The board was involved in bid rigging.

Obama and Blagojevich and Health Planning Board rigging

Obama corruption ties in IL TRS should lead to indictment

“Gov. Rod Blagojevich’s campaign fund recently announced expenditures
totaling more than $1.3 million despite the fact that he’s not running
for anything other than his political life and possibly jail. The
recent disbursements from Blagojevich’s campaign war chest include
$705,000 to Winston & Strawn, $500,000 to his former criminal defense
lawyer Ed Genson and another $100,000 for criminal defense co-counsel
Sheldon Sorosky. At this rate, the governor’s campaign fund, which
swelled to $2.7 million in 2008, could potentially be emptied by legal
expenses.

Political campaign funding in Illinois is a scandalous mess. Antiquated
laws allow politicians to virtually use their campaign coffers as
unregulated slush funds.

When a politician raises campaign funds, those dollars should only be
used for that campaign for that office—print and broadcast media
advertising, retaining political advisers and campaign staff, phone
banks to get out the vote and Internet gurus to mass-produce blast
e-mails, and so on.”

Governor Blagojevich was arrested as the result of an ongoing
investigation of “pay to play” corrupt politics in Chicago and
Illinois and as an offshoot of the Tony Rezko trial.

Governor Blagojevich has been recently quoted as saying:

“I can’t wait to begin to tell my side of the story and to address
you guys and, most importantly, the people of Illinois. That’s who
I’m dying to talk to,”

“There’s a time and place for everything. That day will soon be
here and you might know more about that today, maybe no later than
tomorrow.”

The Citizen Wells blog has been reporting on Rod Blagojevich since April
2008 as well as the ties to Obama and corruption in Chicago and IL.

Here are some quotes from the Blagojevich news conference:

“I am dying to show you how innocent I am,”

“I am absolutely certain that I will be vindicated. … I have on  my side the most powerful ally there is, and it’s the truth.”