“High importance. I met with Jim and Mike in Denver. They are both old friends of the Clintons and have lots of experience. Mike hosted our Boulder Road Show event. They are reliving the 08 caucuses where they believe the Obama forces flooded the caucuses with ineligible voters. They want to organize lawyers for caucus protection, election protection and to raise hard $.”…Podesta Wikileaks email leak

Obama stated that he personally did not order a wiretap of Donald Trump.

“I spoke with the President twice yesterday about the wiretap story. I haven’t seen him this pissed off in a long time. When I mentioned Obama “denials” about the wiretaps, he shot back: “This will be investigated, it will all come out. I will be proven right.”

The big news Saturday after Trump’s disclosure was the fact that neither Obama nor any Obama administration officials actually denied that Trump’s offices were ever wire tapped.

Instead the press focused on the rather narrow denial that Obama himself never ordered such a wiretap. [Wouldn’t it strain belief that a major presidential candidate’s offices were wiretapped and the president was never informed?]

Today on the “Meet the Press” James Clapper, Obama’s Director of National Intelligence, denied any agency that operated under him, including the FBI, ever wiretapped the Trump offices. “To my knowledge,” he added. [Wasn’t Clapper the same man who testified under oath that the NSA never collected phone data on millions of Americans — a fact proven untrue by the Snowden revelations?]

But the most important Clapper revelation from “Meet the Press” was this: He empathically told Todd the Obama intelligence agencies found “no evidence” of collusion between Trump’s campaign and the Russians. Nothing. Nada.

If that is true, and Trump is right he was indeed wiretapped, it will only fuel his argument that Obama administration officials improperly eavesdropped on his offices.

Trump will be justified when he claimed in tweets yesterday that this was Nixon-style “Watergate” activities.

There are number of couple things to remember here as this story unfolds:”

“Clearly, the Democrats aren’t interested in a fair process. They are on a mission: torpedo Trump early.

This week, President Trump gave a bold and inclusive speech to Congress. It won wide praise. The Democrats don’t want Trump to succeed. Hence, all the smokescreens.”

“Why did Colin Powell allow Patrick Fitzgerald to be pulled away from the Blagojevich prosecution?”…Citizen Wells

“Why wasn’t Rod Blagojevich, the Governor of Illinois, wiretapped at least by 2005 when it was known in 2003 that there was widespread corruption in his administration?”…Citizen Wells

Today, March 15, 2013 is the one year anniversary of Rod Blagojevich’s 14 year prison sentence.

“A year in prison, Rod Blagojevich in good spirits”
“It’s been a year since Rod Blagojevich entered a federal prison in Colorado to start serving his 14-year sentence for corruption — and his attorney says while the former Illinois governor misses his family, he remains in “good spirits” and is “hopeful” the conviction will be overturned.

Blagojevich’s appellate lawyer Len Goodman — who, along with attorney Lauren Kaeseberg, is working on the appeal — told POLITICO that Blagojevich’s family visits him “as often as they can make the trip” to Englewood, a low-security facility in Littleton, Colo.”

“And next up for the former governor, Goodman said, is his case on appeal in the 7th Circuit. Blagojevich’s opening brief is due April 25, Goodman noted.

“He is hopeful that his appeal will be successful and that his conviction will be overturned,” Goodman wrote.”

“Goodman, meanwhile, said he is currently busy working his way through thousands of pages of trial transcript as he works on Blagojevich’s appeal.” 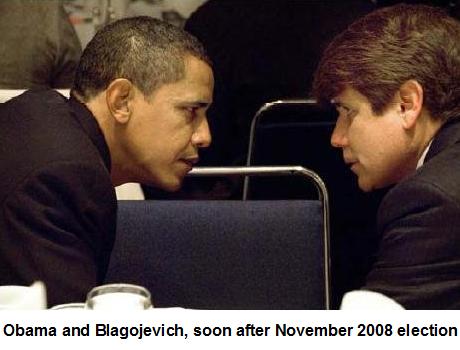 “Why wasn’t Rod Blagojevich, the Governor of Illinois, wiretapped at least by 2005 when it was known in 2003 that there was widespread corruption in his administration?”

BLAGOJEVICH “Now Patti works. She’s very good at what she does. She’s as qualified as Michelle Obama, if not more qualified. Michelle Obama is getting sixty five grand a year for you know, what was it, Tree House Foods, Patti?”


QUINLAN “Tree House Foods is what she was on.”

BLAGOJEVICH “Yeah and she’s making 0 grand over at the University of Chicago.”


BLAGOJEVICH “…where her fath-, her husband’s federal months, federal funds are going there? What?”

P. BLAGOJEVICH “Yeah, which of course went up as soon as he got elected to Senate and he was able to get federal funding to University of Chicago. Get this, I think the most…”

In case you didn’t see this yesterday.

“From the Blagojevich complaint we discover more interesting conversations centered around the senate seat and more people caught on tape.

“101. On November 10, 2008, ROD BLAGOJEVICH, his wife, JOHN HARRIS, Governor General Counsel, and various Washington-D.C. based advisors, including Advisor B, discussed the open Senate seat during a conference call. (The Washington D.C.-based advisors to ROD BLAGOJEVICH are believed to have participated on this call from
Washington D.C.). Various individuals participated at different times during the call. The call lasted for approximately two hours, and what follows are simply summaries of various portions of the two-hour call.”

It should be interesting.”