Congress 101, How to act like a congressman, US Constitution, Support military, Listen to public, Act like you have some damn sense

Congress 101, How to act like a congressman, US Constitution, Support military, Listen to public, Act like you have some damn sense

New members of Congress recently received indoctrination on how Congress works. If past results are any indication, forget everything you heard unless it pertained to…

Most in the military take their oath to defend the US Constitution seriously. One military officer, LTC Terry Lakin, is living that oath.


THANK YOU to everyone for the tremendous response and participation in “Terry Lakin Action Week”- your phone calls and messages are making a difference. We apologize to anyone who hasn’t received a response yet back to an email- we do our best to keep up, but it is hard sometimes to keep abreast of all requests and comments received.

PLEASE KEEP UP THE PRESSURE- PHONE CALLS TO ELECTED OFFICIALS MATTER- AND A SPECIAL THANKS TO THOSE OF YOU WHO WALKED INTO CONGRESSIONAL DISTRICT OFFICES TO RAISE YOUR VOICE IN SUPPORT OF LTC LAKIN.

Just this week, there were significant new developments on the eligibility front:
A state legislator in Texas introduced a bill requiring presidential candidates to file birth certificates- with the notable comment below:

“This bill is necessary because we have a president whom the American people don’t know whether he was born in Kenya or some other place,’ Rep. Leo Berman, R-Tyler, said in reference to President Barack Obama and of House Bill 295. ‘If you are running for president or vice president, you’ve got to show here in Texas that you were born in the United States and the birth certificate is your proof.
http://lubbockonline.com/local-news/2010-11-17/birth-certificate-bill-filed-presidential-candidates

AND— former Alaska Governor Sarah Palin, in an interview in Anchorage pointed out the failure to vet Barack Obama in 2008:

Sarah Palin chatted with KWHL’s Bob and Mark Show to discuss the re-release of John Ziegler’s documentary How Obama Got Elected and her travelogue series, telling Bob and Mark that the hagiographic coverage of Obama in 2007-8 is now “coming home to roost”:

We know that Obama wasn’t vetted through the campaign, and now, you know, some things are coming home to roost, if you will, which is inexperience, his associations, and that ultimately harms our republic when a candidate isn’t – isn’t vetted by the media, that cornerstone of our democracy. So, you’re right, it’s not about me and whether you like my politics or not. You can push all that aside, and just pay attention to what that message is in this documentary, and that is that things have got to change for the better in the state of journalism. Otherwise, you know, it could be part of a demise of our democracy if that cornerstone erodes.

Be sure to download and read our Congressional Blunders report avaiable from the home page of our site.

WHAT YOU CAN DO NOW
Support Terry’s Communications Efforts
http://www.safeguardourconstitution.com/support-the-foundation.html

Add a Banner to Your Website
http://www.safeguardourconstitution.com/banners-and-graphics.html
Forward this email to anyone you feel may have an interest in Terry’s case.”

High ranking military officers are speaking out, questioning Obama’s eligibility and at least one general has called for Obama’s resignation. If you were in Congress in  2008 and 2009 and bought in to the Orwellian lies from the media and Obama camp and the hustle from Obama, pay attention and admit that you made a mistake. If you are not willing to trust members of the military like LTC Terry Lakin, then pay attention to this.

“The Biggest Hustle in Human History”

“Is the President’s resume accurate when it comes to his career and qualifications? I can corroborate that Obama’s “teaching career” at Chicago was, to put it kindly, a sham.

I spent some time with the highest tenured faculty member at Chicago Law a few months back, and he did not have many nice things to say about “Barry.” Obama applied for a position as an adjunct and wasn’t even considered. A few weeks later the law school got a phone call from the Board of Trustees telling them to find him an office, put him on the payroll, and give him a class to teach. The Board told him he didn’t have to be a member of the faculty, but they needed to give him a temporary position. He was never a professor and was hardly an adjunct.

The other professors hated him because he was lazy, unqualified, never attended any of the faculty meetings, and it was clear that the position was nothing more than a political stepping stool. According to my professor friend, he had the lowest intellectual capacity in the building. He also doubted whether he was legitimately an editor on the Harvard Law Review, because if he was, he would be the first and only editor of an Ivy League law review to never be published while in school (publication is or was a requirement).

Consider this: 1. President Barack Obama, former editor of the Harvard Law Review, is no longer a “lawyer”. He surrendered his license back in 2008 possibly to escape charges that he “fibbed” on his bar application. …”

“Curiously, since I relayed a report of Obama’s “teaching career” at Chicago (he was apparently never a law professor, as some have claimed), the Illinois Bar has decided to partially redact what little public information it had available on its website related to the President’s legal status.”

Tagged Act like you have some damn sense, Congress 101, How to act like a congressman, Listen to public, Support Military, US Constitution

Barack Obama held a rally in downtown Charlotte NC on Sunday, September 21, 2008. There was a large turnout and the 10,000 reserved tickets did not begin to cover the large numbers. People standing in line were told they would get in, but the majority did not. The crowd was orderly and the only commotion I observed was the banter between the anti abortion and Obama pro choice proponents.

I interviwed the anti abortion group. They were affiliated with Operation Save America. One gentleman stated:

I asked for a response from someone standing in line to hear Obama. A lady stated that abortion is not genocide. She also stated that she was an independent, had seen all 3 candidates and chose Obama.

I spent several minutes talking to a gentleman that had spent 4 years
in the Marines and was now in the Army. He was aware of the Philip J
Berg lawsuit served on Obama. He was shocked at the lack of coverage by the MSM. He was also surprised at the armed forces people serving in Iraq that believed Obama would get them home sooner. Perhaps they need to read the article about Obama negotiating with Iraqi leaders to delay discussions until after the election. Obama has a lot of people fooled.

Here are some photos: 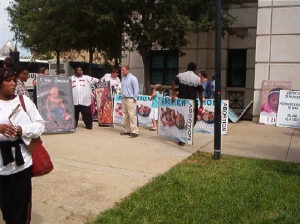 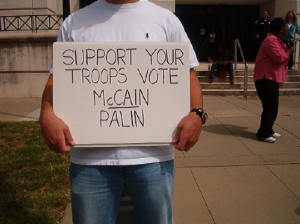