In another sign that the Democrats are ignoring the US Constitution, Senator Max Baucus and Democrat Chairman Howard Dean openly speak of redistribution of wealth in open defiance of the Constitution.

“After the Senate passed a “fix-it” bill Thursday to make changes to the new health care law, Sen. Max Baucus, D-Mont., chairman of the influential Finance Committee, said the overhaul was an “income shift” to help the poor.

As Democrats tout the moral underpinnings of the federal health care system overhaul — ensuring health care coverage for nearly all Americans — one senator appeared to go off message when he said the legislation would address the “mal-distribution of income in America.”
After the Senate passed a “fix-it” bill Thursday to make changes to the new health care law, Sen. Max Baucus, D-Mont., chairman of the influential Finance Committee, said the overhaul was an “income shift” to help the poor.
“Too often, much of late, the last couple three years, the mal-distribution of income in American is gone up way too much, the wealthy are getting way, way too wealthy and the middle income class is left behind,” he said. “Wages have not kept up with increased income of the highest income in America. This legislation will have the effect of addressing that mal-distribution of income in America.”
That contrasted with the arguments Democrats have been making in the past year for reinventing the health care system: to expand health care coverage to 32 million uninsured Americans and tighten regulations on  insurance companies while reducing the federal deficit.” 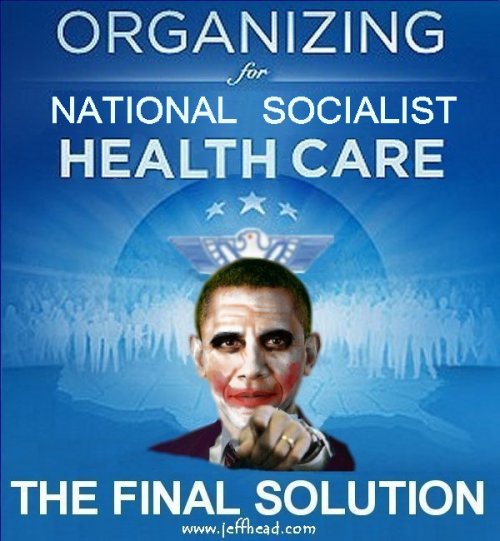 Correct me if I am wrong, once they opened this public property up to politicians of the Democrat party, for a public forum, how can they legally exclude opposing views?

“This video was taken on Tuesday, August 25th, 2009 at Rep. Jim Moran’s (D-VA) Town Hall meeting on Obama Deathcare (Howie Dean was there too) held at South Lakes High School in Reston, VA.

Many people were left outside when the school filled to capacity. School security officer Wesley Cheeks, Jr. did not like my anti-Obamacare poster which used one of the gone-viral “Joker” graphics.

When I said to Officer Cheeks, “This used to be America!” his response was: “It ain’t no more, OK?”

I feel sorry for Officer Cheeks. He, like many African-Americans are being played by the racist Obama administration. Wake up people. They used to want you only for your votes, but now with the huge hispanic illegals pouring in they won’t even need you for that. Watch those inner city abortion clinics get stimulated though. Democrat and church leaders sure seem to have time and money to build those.

Satan is in da house.”

Thanks to commenter Fernley Girl

I have sent an email request to the Reston, VA police requesting the statute allowing the police officer to demand that the poster be taken down.

Larry Sinclair is in Washington DC. He is available for interviews and will be interviewed by Jeff Rense today. Larry visited the DNC headquarters in Washington to get answers as to why he has been ignored. Last fall, Sinclair attempted to contact the DNC regarding his allegations about Obama and drug use. Since then Sinclair has attempted to contact Howard Dean as well as delegates. In some cases, Larry and others following this story have received insults and personal attacks from those associated with the DNC. Larry has documented his visit to the DNC and you can watch the video and follow the story on his blog: