Many Americans were stunned and outraged when this news and photo of Obama bowing low to the Saudi king emerged. 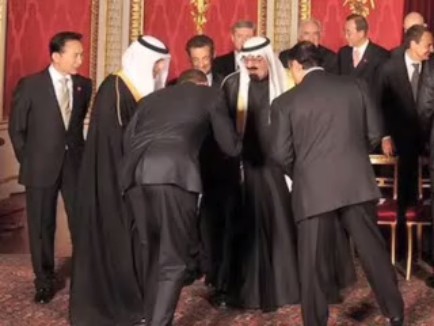 Now listen to Pastor Dr. James Manning, a man I have come to respect for his intelligence, articulation and patriotism.

Now do you understand why Obama bowed so low to the Saudi King?

Now do you understand why…..

Why Wright and Farrakhan traveled to Libya and met with Moammar Kadafi (Ghadafi).

Why Obama did not take Federal matching funds.

How Obama stole the Democrat primaries and caucuses.

How Obama was able to utilize so many Internet and other resources to steal the 2008 election.

Why Obama traveled to Pakistan in1981.

Why nobody remembers Obama being a student at Columbia.

Why Khalid al-Mansour and the Saudis paid for Obama’s Harvard education.

Why Syrian born Tony Rezko made contact with Obama while at Harvard.

Why Obama wanted Gitmo closed and Muslim terrorists given US Constitutional Rights.

Why the Saudis paid for Obama’ grandmother, Sarah Obama to fly to Mecca.

Why the Fox network will not touch Obama’s eligibility issues.

Obama is a Muslim.

And the biggest why of all….

Why Obama has employed a legion of private and government attorneys to avoid presenting a legitimate birth certificate and college records.