Tag Archives: Take it to the Streets Tour

I also spoke to Larry Sinclair just a few minutes ago about his blogspot blog that was hacked yesterday. Blogspot has responded.

The following message is from Larry Sinclair and Citizen Wells:

Diversions are the hallmark of Obama, the Obama camp and the CP. They are trying to divert our attention, energy and resources away from exposing Obama to the public. This week is crucial. I believe we can make a difference with those Independents and undecided voters and probably some Obama supporters that have not heard the truth yet.

Make sure everyone is aware of the Hannity and Colmes interview of Jerome Corsi on Monday night, October 13, 2008. Also examine the ODM document that Corsi has confirmed. I published it on August 20, 2008.

Here are some photos taken after our meeting: 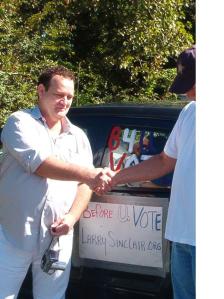 Larry Sinclair will give a live radio interview from Florida tonight, Thursday, October 9, 2008. Larry Sinclair is on his Take it to the Streets Tour to tell his story of a drug and sex encounter with Barack Obama in November 1999. Sinclair will also share his knowledge of Donald Young, the gay choir director at TUCC, who was murdered in December 2007 and also inform the public about the Philip J Berg lawsuit.

Check back here tonight for details of the radio interview.

I tuned in to the show and it does not meet my minimum standards for quality. The language was repulsive and I draw the line there.

To read more from Larry Sinclair and contribute to his tour, visit: