GA senate chairman Ligon report on testimony from Dec 3, 2020 hearing, “should not be certified”, “chaotic and the results cannot be trusted”

GA senate chairman Ligon report on testimony from Dec 3, 2020 hearing, “should not be certified”, “chaotic and the results cannot be trusted”

“V. FINDINGS
1- The November 3, 2020 election was chaotic and the results cannot be trusted.
2- The Secretary of State and the State Elections Board failed to enforce the law as written in the Georgia Code, and furthermore, created policies that contravened State law. As Senator Matt Brass concluded at the December 3 hearing, “We have heard evidence that State law was not followed, time after time after time.”
3- The Secretary of State failed to have a transparent process for the verification of signatures for absentee ballots, for the counting of votes during the subsequent recount and audit, and for providing the type of guidance and enforcement necessary to ensure that monitors and other observers had meaningful access to the process.
4- The Secretary of State instituted an unconstitutional gag order so that monitors were told not to use photography or video recording devices during the recount.
5- Election officials at all levels failed to secure test ballots and actual ballots. Many reports indicate that proper procedures were not followed, and there was systematic failure to maintain appropriate records of the chain of custody for these ballots, both prior to and after voting and throughout the recount.
6- The Secretary of State and Election Supervisors failed to stop hostile behavior of workers toward citizen volunteer monitors during the recount process.
7- The events at the State Farm Arena are particularly disturbing because they
demonstrated intent on the part of election workers to exclude the public from viewing the counting of ballots, an intentional disregard for the law. The number of votes that could have been counted in that length of time was sufficient to change the results of the presidential election and the senatorial contests. Furthermore, there appears to be coordinated illegal activities by election workers themselves who purposely placed fraudulent ballots into the final election totals.
8- Grants from private sources provided financial incentives to county officials and exerted influence over the election process.
9- The oral testimonies of witnesses on December 3, 2020, and subsequently, the written testimonies submitted by many others, provide ample evidence that the 2020 Georgia General Election was so compromised by systemic irregularities and voter fraud that it should not be certified.” 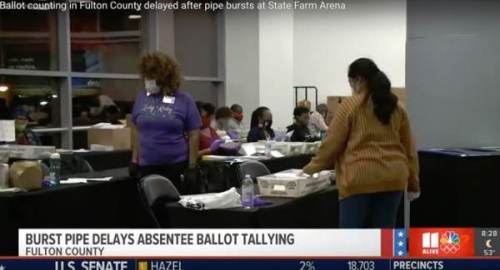 4 responses to “GA senate chairman Ligon report on testimony from Dec 3, 2020 hearing, “should not be certified”, “chaotic and the results cannot be trusted””