“Arizona’s voter participation rate is 78.6%. Wisconsin’s is over 89%. Somebody is lying.”…Citizen Wells

1. “Qualified electors casting ballots in person on Election Day in Maricopa County submitted their completed ballot to an electronic tabulation machine. Numerous voters were alerted by these devices to a facial irregularity in their ballot—frequently an ostensible ‘overvote’ — but were induced by poll workers to override the tabulator’s rejection of the ballot in the good faith belief that their vote would be duly registered and tabulated. In actuality, overriding the electronic tabulator’s alert automatically disqualifies the putative ‘overvotes’ without additional review or adjudication.​”

2. Arizona law requires that putative overvotes be subjected to further review in
an effort to discern the actual intent of the voter. While this safeguard was afforded to putative overvotes cast on early ballots and on Election Day ballots that poll workers properly segregated in a separate repository, potentially thousands of voters across Maricopa County have been disenfranchised by systematic improper tabulator overrides.

3. Upon information and belief, the adjudication and tabulation of these ballots
will prove determinative of the outcome of the election for President of the United States in Arizona and/or other contested offices in Maricopa County.

4. Declaratory, injunctive and mandamus remedies are necessary to prevent
irreparable injury to the Plaintiffs, vindicate the clear directives of the Arizona Legislature, ensure the fair and equal treatment of all Maricopa County electors, and secure the integrity of the results of the November 3, 2020 general election.”

“An Arizona state court judge refused to seal evidence, including video taken within a polling place and declaration of witnesses with their name and other identifying information, in a case brought by the Trump campaign and Arizona Republican Party claiming voter fraud.

The Trump campaign and Arizona GOP filed the lawsuit on Saturday claiming that thousands of votes in Maricopa County were unlawfully disqualified or considered ”overvotes” — voided because they were marked for more than one candidate in the same race. They asked for the sealing of the evidence in a subsequent motion.” 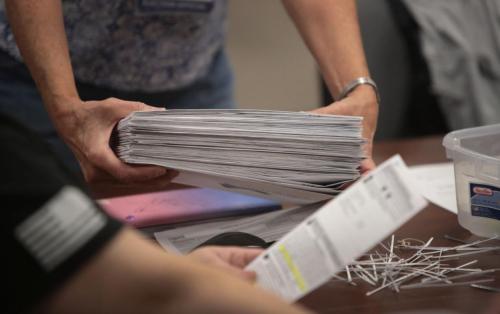