“It’s more important for people to get their ballots and turn them in than have a perfect set of instructions,”...Gabriel Sterling on GA absentee ballot error

“Certainly, Raffensperger is aware of all of this and he knows these items render the Georgia 2020 election invalid.  The results in Georgia should go through a forensic audit.

Georgia’s Brad Raffensperger is a special creature. He lies about his state’s elections and then calls President Trump the liar.  There are hundreds of thousands of invalid ballots for Joe Biden in Georgia’s results and Raffensperger and the President and anyone who’s paid attention knows it.”

Selected after Texas rejected and reported flaws in February 2019.

WHY DID THE STATE OF GEORGIA SIGN A $107 MILLION CONTRACT WITH DOMINION VOTING SYSTEMS IN 2019 MONTHS AFTER TEXAS TESTED AND REJECTED IT AGAIN?

Why did Raffensperger select Gabriel Sterling who tweeted the following:

“I have worked with Mr. Sterling on several projects, and have found him to be knowledgeable and insightful to the intersection between the political and business communities,” said Raffensperger. “He has shown a creativity and management acumen that will be helpful in ensuring that the staff at SOS are properly equipped to perform their duties.”

Raffensperger picked Gabriel Sterling because he shared the same Anti Trump sentiments and willingness to employ “the end justifies the means.”

Search on Citizen Wells “georgia” to find a mountain of evidence of an illegal election including a disregard for Georgia Law, outright fraud and gross incompetence. 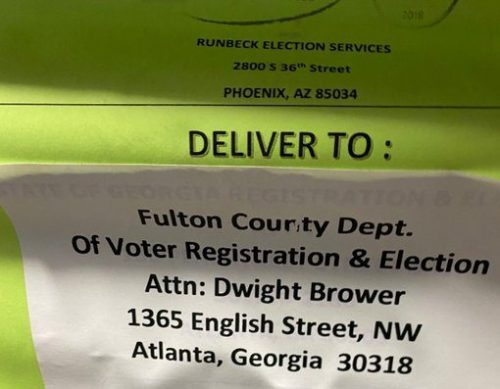 “President Trump:  We have at least 18,000, that’s on tape.  We had them counted very painstakingly.  18,000 voters having to with BEEP (Ruby Freeman).  She’s a vote scammer, a professional vote scammer and hustler.  BEEP (Ruby Freeman) that is the tape that is shown all over the world.  It makes everybody look bad, you, me and everybody else.  Number one, they said very clearly, and it’s been reported that they said that there’s a water main break.  Everybody fled the area.  And then they came back.  BEEP (Ruby Freeman) and her daughter and a few people.  There were no Republican poll watchers.  Actually, there were no Democrat poll watchers.  I guess they were them.  But there were no Democrats either.  And no law enforcement.  Early in the morning they went to the table with the black robe, the black shield and they pulled out the votes.  Those votes were put there a number of hours before.  Brad, you would know.  It was probably eight hours, or seven hours before, and then it was stuffed with votes.   They weren’t in an official voter boxes they were in what looked to be suitcases, or trunks, or suitcases.  But they weren’t in voter boxes.  The minimum number they could be because they watched it certified in slow motion, instant replay, if you can believe it, and it was magnified many times over,  and the minimum it was was 18,000 ballots all for Biden.”

“And here is audio of President Trump telling Secretary of State Brad Raffensperger that fraudsters were able to manufacture 18,000 illegal votes in the State Farm Center in the dead of night on election day!

That is more than enough votes to flip the state of Georgia.
It also puts Raffensperger on notice! We have the fraud! Now do your job.

May Raffensperger should have listened to the US president rather than stab him in the back and leak his conversation to some WaPo hack.”