“The certification of Arizona’s FALSE results is unethical and knowingly participating in the corruption that has disenfranchised AZ voters,” …Jenna Ellis

“.@realDonaldTrump has made it abundantly clear he’s more interested in pandering to his neo-nazi base than being @POTUS for all Americans.”…Katie Hobbs Arizona Secretary of State

If you missed the rally you can watch it below

Hopefully you have been paying attention and were already aware of Matt Braynard’s testimony at the Arizona election hearing.

From We the People Daily.

“I have a high degree of confidence that the number of ballots that were cast that should not have been cast, illegal ballots, surpasses the margin of victory as it stands right now,” said Braynard said at a public hearing on election issues in Arizona.

Braynard, a former Trump data strategist who runs the Voter Integrity Project, made headlines after raising money to purchase voting information for a ‘deep-dive’ analysis looking for fraudulent activity. Earlier in the hearing, he said that he and his team called Arizona residents who had never voted before, yet voted in this election. One of them is a felon who can’t legally vote.”

“Following Braynard’s comments, data expert Dr. Shiva Ayyadurai said that the only way for Biden to have caught up with Trump’s lead in Arizona following election day is if votes came in a 130% Biden and -30% for Trump.”

“Switching gears to voting machines – Col. Phil Waldron (Ret.), a cybersecurity expert, testified that his team warned the Department of Homeland Security (DHS) that voting machines are vulnerable to hackers and manipulation.

“When I started working on this project in August, I called them up and said, you guys have got to come out and look at it. They did. They spent an initial three hours going through this data. At the end of that, one of them said, ‘I think I need to go outside and throw up,” said Waldron, speaking of Dominion Votings Systems machines.”

You may not be aware of this:

Liz Harris, a Arizona State Rep, with some of her volunteers and other concerned citizens, are holding a rally in front of the AZ Statehouse today, Wednesday December 30, 2020 at 6:00 PM.

From the Geller Report.

“Enthusiasm is contagious and Bobby Piton has no shortage of it. Piton became an instant success after his appearance at the first round of hearings on election integrity in Arizona. Piton, an investment advisor and managing partner of Pre-Active Investments, is also a self-proclaimed math enthusiast, who was called in to assist a colleague to decipher election data from Arizona, just days before the hearing.

Piton analyzed the data from Arizona’s own government databases and discovered a unique subset of voters who could not be identified by their binary sex (male or female), which he termed ‘U’ voters. In Arizona alone, he identified as many as 300,000 of these U voters. He believes the voters comprising the U group are “phantoms”, or fake people who cast votes.

To prove his theory, Piton identified a subset of about 95,000 of these “phantom sleeper voters” in Arizona. A group of volunteers led by Liz Harris, candidate for AZ state representative in the 17th district, set out to determine whether these voters existed or whether they were truly phantoms. Of the 95,000 names identified, Piton narrowed down the potentially fake voters to a subset of 3899 potential phantoms on which to focus their efforts. He estimated 20 to 30% would be non-existent phantoms.

Harris and her team set out to find these voters and began a door-knocking campaign. The volunteers were able to knock on 2000 doors in an attempt to find the individual voters on the phantom list. They were successful in finding 1000 people willing to talk to them and of those, 539 voters who should have resided at the residence were non-existent. That is an incredible 53.9% of the registered voters who were “phantom sleeper voters”.” 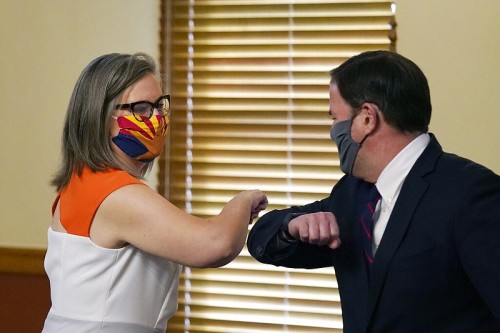