Just in from Andrea Shea King: 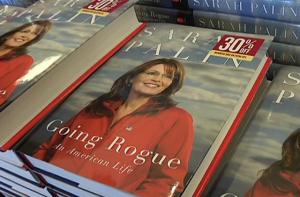 Photo by Central Florida News 13
Kristinn Taylor is standing in line at the Barnes & Noble Bookseller store in Orlando along with some 1,000 others who are hoping to get a wristband. Why?
Because Sarah Palin is coming to town. 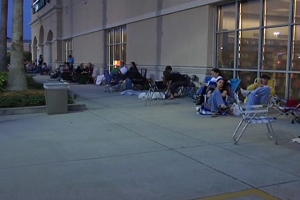 Photo by CFN 13
Kristinn, Free Republic media spokesman, says he arrived at the site at 7:45 a.m. to find that there were already 600 people snaked around the front, side and back of the building.  Also across a street between two buildings and back up the block, around the front of another set of stores, down that street, and in front of the local …  well, you get the idea.  It’s a line that snakes a total of seven blocks long.
“After they opened the doors at 9 a.m. we finally turned the corner to the front of the building, and have half a block to go,” Kristinn said. 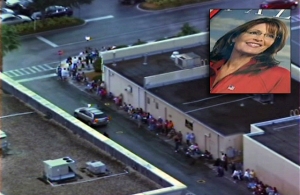 Photo by CFN 13
“The people in line are roughly 50-50 male-female. Chris Matthews will be disappointed to learn that there are minorities in line also waiting to meet Sarah Palin.  The crowd is in a good mood and of course, we’re not leaving piles of trash, and in all other ways are well mannered.  And as usual with a gathering of conservatives, law enforcement presence is at a minimum. The women in line for this book signing are much more attractive than the women I saw at the Hillary Clinton booksigning some years ago that the Freepers protested at.”
Mercifully the late autumn Florida weather is cooperating.
“It’s in the 70’s and cloudy with a light breeze, so we’re not getting baked,” said the fair haired, fair skinned Freeper.
Earlier this morning Kristinn says “There was a real good Sarah Palin impersonator here .  A dead ringer.”
He says they’ve not been told by book store personnel how many wrist bracelets will be distributed.
“The assistant manager said that yesterday Palin’s tour staff authorized the Orlando store to issue “stand-by” bracelets which means that after those with the  lettered bracelets are done, if Palin is up to it she’ll start signing books for those in the stand-by line. But no guarantees. Yesterday, according to a Ft. Bragg Public Affairs Officer, Palin took care of 4,000 people. Another 500 disappointed fans were turned away.
“They were told that Palin has gotten into a good rythym and been able to pick up her pace signing books.  The bookstore manager said that in a meeting last week about the stop, stand by bracelets weren’t even an option.”
Earlier today at a Jacksonville book signing, Kristinn says it was reported that 500 bracelets were issued for that book signing.
Palin’s next stop today is at The Villages (site of Glenn Beck’s visit last Saturday), and then it will be on to Orlando with an estimated time of arrival at 7:30 p.m. tonight.
Orlando is the last stop of the first portion of her book tour before Sarah takes a break for the Thanksgiving holiday.
Kristinn says media coverage has been good.  “All the Orlando TV stations have been here, and Central Florida News 13 is still on site, conducting interviews.”
So as I leave him, Kristinn is in line. Still…
—
THE ANDREA SHEA KING SHOW
Weeknights  @ 9 pm EST
on BlogTalkRadio dot com
***
Opinion writing at
RadioPatriot.wordpress dot com
Big Hollywood.breitbart dot com
***
Weekly Column
Surfin Safari @ World Net Daily
WND dot com
***
VOICE of  LIBERTY Podcast Network
Contributor
VoiceOfLibertyPodcast dot com