Obama tax returns for 2004 and 2005, Rezko deals, Why did Obama have Harvey Wineberg prepare 2005 tax return?, Why is Wineberg on deed?, Why did Wineberg get Administration post?

Obama tax returns for 2004 and 2005, Rezko deals, Why did Obama have Harvey Wineberg prepare 2005 tax return?, Why is Wineberg on deed?, Why did Wineberg get Administration post?

“Why has Obama, since taking the White House, used Justice Department Attorneys, at taxpayer expense,  to avoid presenting a legitimate birth certificate and college records?”…Citizen Wells

“Why did Obama switch to Harvey Wineberg’s firm to have his 2005 tax return prepared?”…Citizen Wells

“Why did Mutual Bank fire whistleblower Kenneth J Connor after he challenged the appraisal on the land purchased by Rita Rezko, just prior to the land sale to Obama?”…Citizen Wells

Harry Reid and the other eighth wits from the left are screaming about mythological issues with Mitt Romney’s tax returns. Where is the mainstream media on Obama’s tax returns.

Yesterday at Citizen Wells, we revealed Obama reporting a bribe from Robert Blackwell on his 2001 tax return.

“The Times details how Obama was still “of counsel” to his former law firm, but that he was not providing any services to that entity. Then Obama made a deal with Blackwell, and wanted to conceal that Blackwell was supporting him. So Obama “laundered” the “legal fees” by running them through the law firm and then issuing a list of the law firm’s clients-none of which had anything to do with Obama–to disguise the Blackwell money in a laundry list of hundreds of unrelated “clients.” This was a classic case of money laundering and business fraud. Obama wanted to conceal the large sum he was receiving from Blackwell, so he concealed that Blackwell was the source of his income by pretending he was providing services to the law firm’s other clients. Utter fraud. “Barry O” ain’t stupid, he’s slicky and tricky, and he’s a ticking time bomb for the Democratic Party.”

“Now that you know more about the money that Obama received from Robert Blackwell and his companies, you tell me if you believe that Obama was transparent and open with the presentation of this tax form.”

Read the following sequence of events and decide for yourself if it looks suspicious.

“11. In late 2005 or early 2006, Conner performed an appraisal review of the Adams Appraisal (Exhibit C) per the directive of Richard Barth and James Murphy. Conner prepared a written Appraisal Review report (ARR) opining that the Adams Appraisal overvalued the Greenwood lot by a minimum of $ 125,000.00″

Conner later told World Net daily when he initially was fired, that the bank and the Rezkos were engaged in “fraud, bribes or kickbacks, use whatever term you want,” to benefit the Obamas.

Soon after the Blagojevich arrest, Conner was interviewed by investigators from Fitzgerald’s office.
Jan. 2006: Rita Rezko sells the Obamas one-sixth of her lot for $104,500. 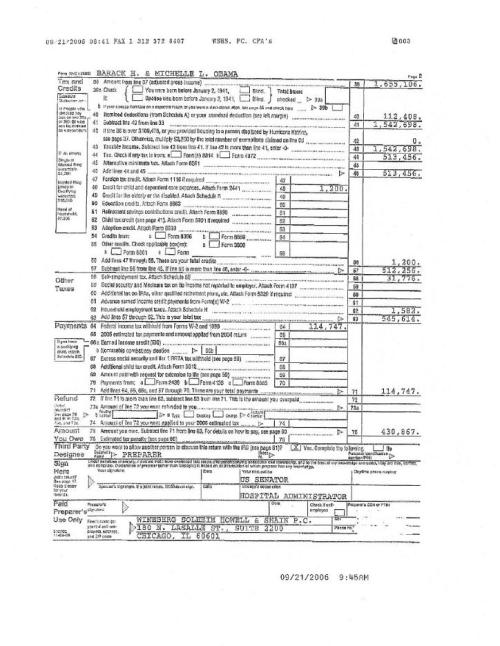 Harvey Wineberg is on the Obama house deed.

“WND reported in December 2008 that William Miceli, the attorney for convicted political operative Tony Rezko and a fundraiser for Obama, owns the Obama home at 5046 S. Greenwood.

Miceli is a lawyer at the Chicago law firm Miner, Barnhill & Galland, which employed Obama when he did legal work for Rezko.”

“Now, a search of records shows that, in addition to Miceli, the Obama mansion is owned by Chicago Probate Judge Jane L. Stuart and Obama accountant Harvey Wineberg, both of whom are paying taxes on the property.”

The President also announced his intent to appoint Harvey S. Wineberg as a Member of the President’s Advisory Council on Financial Capability.  His biography is below.

By the way,  Harvey Wineberg was the Treasurer of Obama’s 2004 Senate campaign and a bundler for Obama’s 2008 campaign.

Tagged Obama tax returns for 2004 and 2005, Rezko deals, Why did Obama have Harvey Wineberg prepare 2005 tax return?, Why did Wineberg get Administration post?, Why is Wineberg on deed?