“To his kind of judge, Cruz ironically wouldn’t be eligible, because the legal principles that prevailed in the 1780s and ’90s required that someone actually be born on US soil to be a “natural born” citizen. Even having two US parents wouldn’t suffice. And having just an American mother, as Cruz did, would have been insufficient at a time that made patrilineal descent decisive.”…Laurence H. Tribe, Harvard Law Professor

“Moore said he’s seen no convincing evidence that Obama is a “natural born citizen” and a lot of evidence that suggests he is not.”…Judge Roy Moore interview by WND

Just in from Mr. H. Brooke Paige, plaintiff in the complaint against the State of Vermont, Secretary of State James Condos and Attorney General William Sorrell.

“Superior Court Judge Timothy Tomasi granted Plaintiff’s motion to file an amended complaint. The State filed an opposition brief limited to the issue of the Motion for a TRO, they have yet to Answer the Verified Complaint and have
been given until January 26 to answer or be found in default. Plaintiff
filed his amended brief naming Cruz and Rubio as indispensable parties
since their Petitions and Consent Forms were confirmed by the Secretary of
State. ”

“Wednesday the Judge scheduled a hearing on the TRO for Friday the 15th. On Friday the Plaintiff filed his Response to Defendant’s Opposition Brief and the Hearing was attended by Plaintiff and State Defendants who had summoned the Director of Elections to testify. Substantive evidence was provided by the Plaintiff and confirmed under oath by the Director of Elections under cross-examination revealing numerous defects and errors in the process and procedures including counting signatures of many individuals who were not registered. In dozens of instances were not even residents (or inhabitants) of Vermont including the citizens of  CT, NY, NJ, MA and even FL who because the
Petitions were not labeled as for the Vermont Primary did not required the
signatories to certify that they were in fact registered Vermont voters.
Incredibly the Director of Elections testified that his office did not
believe they were required to confirm that the petition signatories were
on the voters rolls in Vermont, rather that they were only required to
determine that the signatures were legible and nothing more. Welcome to
Vermont’s Wild West of Elections where few care about the integrity of the
election process, in fact most probably do not even understand the
concept. In the end the Judge did not grant the TRO citing that the
public interest and concerns over voter disenfranchisement outweighed the
injury to the Plaintiff. Plaintiff will receive the Return of Service and
the executed Summonses on Tuesday for the new Defendants and will file
them with the Court that day, starting the 20 day clock for the new
Defendants to answer or otherwise file a response with the Court.”

Mr. Paige hired Baker Investigations and Process Servers to serve
the Summons and Amended Complaint on the out-of-state Defendants Cruz and
Rubio during their visit to Charleston SC in advance of their appearances
on the Fox Business News Republican Debate. Owner Elizabeth Baker
personally served both Cruz and Rubio on Wednesday January 13, as they
arrived in Charleston. 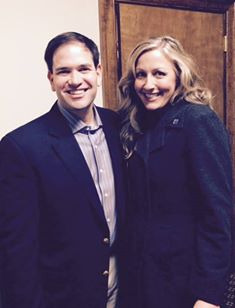 According to Mr. Paige, Elizabeth Baker described the Rubio campaign folks as very accommodating and congenial while the Cruz folks were willing to
cooperate although they seemed less cordial and Boston lawyers contacted
the Plaintiff attempting to substitute “electronic service” for personal
service required by the Court.