“In today’s labor market, there are nearly 1 million “missing” young workers—potential workers who are neither employed nor actively seeking work (and are thus not counted in the unemployment rate) because job opportunities remain so scarce. If these missing workers were in the labor market looking for work, the unemployment rate of workers under age 25 would be 18.1 percent instead of 14.5 percent.”…Economic Policy Institute May 1, 2014

Citizen Wells has been informing and warning you for months about the decimation of jobs for White Americans and millennials and the fact that 75 percent of jobs under Obama went to Hispanics and Latinos.

“I have been warning you about the decimation of white American jobs under Obama.

There were 167,000 fewer white Americans employed in April.

There were 316,000 fewer white Americans employed since January.

There were 875,000 more white Americans not in the labor force since January.

It has dropped 3.3 percent under Obama.

There are over  2.3 million fewer white Americans in the labor force than when Obama took office in January 2009.

I have also reported about what Jim Clifton of Gallup accurately called a Big Lie, the stated unemployment rate.

The real unemployment rate, that is, real humans not employed, could well be 23 percent.

Zero Hedge does a great job of reporting the real economy and jobs situation.

I was pleased to find the following.

“The “Illegal Immigrant” Recovery? The Real Stunner In The Jobs Report”

“Traditionally, when it comes to job numbers reported by the BLS’s Establishment (the source of the monthly nonfarm payrolls change) and Household (the source of the monthly unemployment rate data) surveys, there is a substantial discrepancy. However, in May’s far stronger than expected report, the two for the first time were almost identical: the Establishment Survey reported an increase of 280K jobs, while according to the Household survey 272K jobs were added.

Impressive numbers in a month in which only 215K jobs were expected to be added.

There were the usual kinks, of course. Two thirds of all jobs, according to the Establishment survey, were low-paying, low-quality jobs, primarily teachers, retail, temp help and waiters (something even CNBC has been forced to acknowledge):” 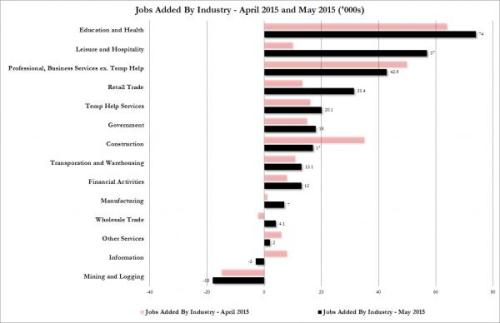 “There were other curiosities: the vast majority of jobs added in May, over 200K, were in the 20-24 age group, and the number of self-employed workers mysteriously soared by 350K to 10 million.

But the biggest surprise came from Table 7, where the BLS reveals the number of “foreign born workers” used in the Household survey. In May, this number increased to 25.098 million, the second highest in history, a monthly jump of 279K.” 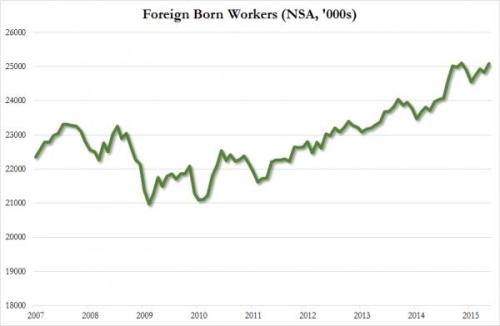 “Assuming, the Household and Establishment surveys were congruent, this would mean that there was just 1K native-born workers added in May of the total 280K jobs added.

Alternatively, assuming the series, which is not seasonally adjusted, was indicative of seasonally adjusted data, then the 272K increase in total Household Survey civilian employment in May would imply a decline of 7K native-born workers offset by the increase of 279K “foreign borns.”

But while all of these comparisons are apples to oranges, using the BLS’ own Native-Born series, also presented on an unadjusted basis, we find the following stunner: since the start of the Second Great Depression, the US has added 2.3 million “foreign-born” workers, offset by just 727K “native-born”.”

“Note: this article is not meant to side on either side of the illegal immigration debate: the upcoming presidential elections will do enough of that. It merely seeks to fill a gaping hole in economist models which are unable to explain or rationalize why America’s seemingly “booming” jobs recovery, which is “firing on all fours” according to the BLS, is not manifesting itself in either inflationary pressures, or broad economic productivity.”