“Tell a big lie and keep repeating it and blame the Republicans for all of the bad deeds committed by Democrats.”…Citizen Wells

“When an opponent declares, “I will not come over to your side,” I calmly say, “Your child belongs to us already… What are you? You will pass on. Your descendants, however, now stand in the new camp. In a short time they will know nothing else but this new community.”...Adolf Hitler

After NC Republicans, including newly elected Lt. Governor Mark Robinson, opposed efforts by the board of education to politically indoctrinate students instead of teaching history, a cartoonist with WRAL in Raleigh responded with a typical left wing Democrat lie. 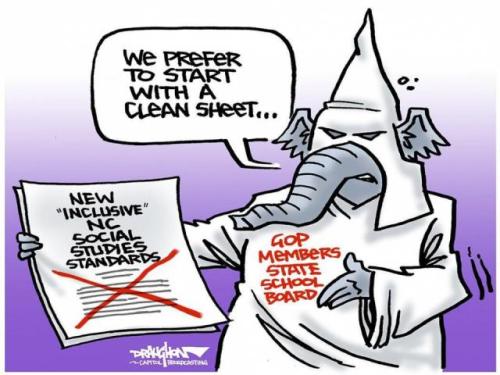 A classic case of the guilty dog barking the loudest! 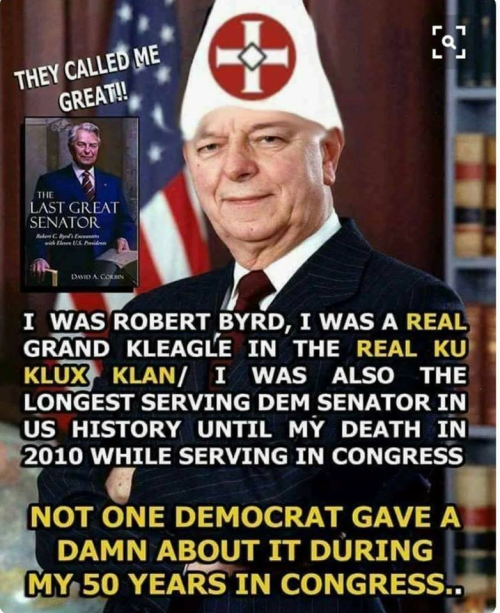 In West Virginia in the 1940s — late 1941 or early 1942, according to Byrd’s memoir — he organized and led a 150-member chapter, or “Klavern,” of the Klan as the “Exalted Cyclops.” In Klan hierarchy, according to Slate, each Klavern is led by an Exalted Cyclops typically elected by his fellow Klansmen. The Exalted Cyclops reports to a “Grand Giant” (provincial leader), “Grand Dragon” (state director) and “Grand Wizard” (national chair).

In his book, Byrd says he worked as a recruiter, or “Kleagle,” for the Klan until early 1943 and then left the state for a welding job in Baltimore. He returned to West Virginia after World War II ended and sent a letter in 1945 to Theodore Bilbo, a Democratic senator and segregationist from Mississippi, complaining about efforts to integrate the military.

“Rather I should die a thousand times, and see Old Glory trampled in the dirt never to rise again, than to see this beloved land of ours become degraded by race mongrels,” he wrote.

“North Carolina Lt. Gov. Mark Robinson is taking umbrage with an editorial cartoon that depicts Republicans as members of the KKK.

Robinson, a Greensboro Republican, took office in January and is the first Black lieutenant governor in North Carolina history.

“It’s something we cannot stand for, folks,” Robinson said at a press conference Tuesday to criticize the cartoon, published Tuesday on the CBC Opinion page of WRAL.com, which like WRAL-TV is owned by Capitol Broadcasting Co.”

“As a public servant I have to put those opinions behind me and do what’s right for everyone in North Carolina,” Robinson said. “And I’m grown enough to do that. …. And if I ran a statewide publication like WRAL, I would not post something like that. It’s all about where you stand at the moment when you speak.”

“The proposed standards are political in nature and paint America as being systematically racist. These divisive standards consistently separate Americans into groups in an effort to undermine our unity. The proposed standards indoctrinate our students against our great country and our founders. The standards are not age-appropriate in the elementary grades. Will you stand with Lt. Governor Robinson in rejecting the current standards the State Board of Education is planning to vote on?” 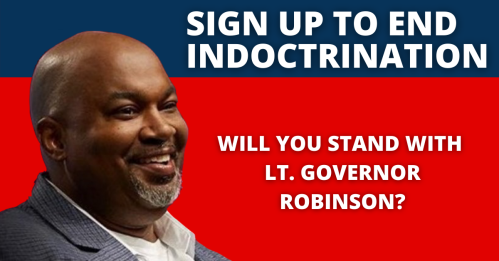