“Sprinkled throughout the rallies were signs promoting violence,” Miller said. “And they said not word of criticism. Not a word of protest.”

Miller said he’s predicted violence for more than a year and a half, and that violence broke out at the Tucson, Ariz., public meeting where Giffords , a Democrat, was shot in the head.

“I think the American people need to hold their politicians accountable for embracing extremist, violence-prone fringe elements,” he said.

“Americans have in the past.”

Many conservatives say it’s just talk, and that any attempt to blame them for Gifford’s shooting is a cynical attempt to exploit a tragedy for political gain.”

I found no link on the internet.

Yes, Brad Miller, we have been trying to hold the Obama camp accountable for years. Where were you?

Where were you when Jon Voight and his family were attacked for asking simple questions in 2008?

Did you demand an investigation when the New Black Panther Party, linked to Obama, threatened voters in Philadelphia? 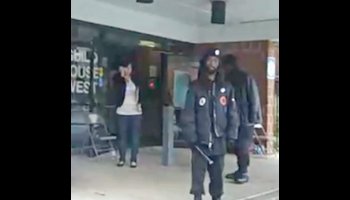 Did you demand an investigation when Lou Dobb’s house was shot at in 2010?

Let’s not forget the game plan of Obama’s cousin Raila Odinga, who Obama campaigned for:

Oh, I almost forgot the beating of a black man by Obama SEIU thugs.

And who could forget this Obama quote “I want you argue with them and get in their face,”

Brad Miller, did you not read about the army of paid bloggers of the Obama camp who spread misinformation and attacked those questioning Obama?

I began learning about the Nazi like tactics of the Obama camp early in 2008. My first question, “Where was Obama on November 4, 1999” got unexpected results. That was my first experience of the backlash from questioning the messiah, Obama. The more questions that I asked, the more serious the attacks which evolved into multiple death threats. Just for asking simple questions.

I am a student of history and a big fan of George Orwell and his insightful book, “1984.” The parallels to Nazi Germany and the totalitarian mind controlling regime of Big Brother were clearly apparent by mid 2008.

Here are some Citizen Wells articles on why the Obama camp resembled Nazi Germany.

Here are some Citizen Wells articles revealing the parallels to 1984.

Brad Miller, you are impuning the reputation of NC with your left wing hypocritical comments.

Brad Miller you had better by God shape up or we are going to ship you out.