Jenna Ellis
@JennaEllisEsq
Look at this picture from the Georgia video… HUGE SPIKE for Biden during the same time the suitcases of ballots started to be scanned. FRAUD. 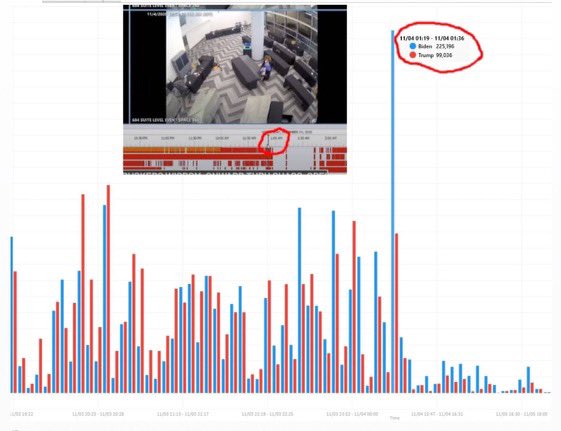 The chart above shows a jump in Biden over Trump votes of almost 200k just after 1:00 AM November 4.

This happened during the time frame of the illegal scanning, referred to as suitcase gate when ballots were pulled from under tables and processed without witnesses.

A woman who identified herself as Jackie Pick, a lawyer who is assisting with their legal case, said the team received video footage from State Farm Arena’s vote-tabulation center in Fulton County, Georgia. The team said that GOP poll watchers were not allowed to watch the counting process in the poll center.

But, according to Pick, an unusual occurrence took place later in the evening at around 10 p.m. ET. A woman—described as a blonde woman with braids—told workers to stop counting and told everyone to go home.

“Everyone clears out, including the Republican observers and the press, but four people stay behind and continue counting and tabulating well into the night,” Pick said. They counted unobserved until about 1 a.m.

Pick said that video footage shows Fulton County election workers waiting at their scanning areas until GOP poll watchers and reporters left the room before they started “scanning ballots,” ostensibly without any observation. Pick noted that it contravenes state and county law.

“WHAT’S UP, RUBY?… BREAKING: CROOKED OPERATIVE FILMED PULLING OUT SUITCASES OF BALLOTS IN GEORGIA IS IDENTIFIED

Earlier today Cristina Laila reported on the explosive video that was revealed during the Georgia ballot counting at the State Farm Arena where crooked Democrats pulled out suitcases full of ballots and began counting those ballots without election monitors in the room.

Trump’s legal team showed a video from the State Farm Arena tabulation center when poll workers were told to leave at 10:25 PM.

A few “workers” stayed behind and were seen pulling suitcases full of ballots out from under tables to be tabulated!

This was the most explosive video of the entire campaign season!”

“The woman in the purple made a mistake and left her purse on her desk advertising her business.

Her name is Ruby Freeman.”