“.@realDonaldTrump has made it abundantly clear he’s more interested in pandering to his neo-nazi base than being @POTUS for all Americans.”…Katie Hobbs Arizona Secretary of State

“I’m going to RELEASE THE KRAKEN”

“Republican attorney Sidney Powell has vowed to “expose every one of” the officials who helped allegedly steal the 2020 election for Democrat Joe Biden, claiming voting machine maker Dominion Voting Systems facilitated the theft.

Powell, who is representing former Trump National Security Advisor Michael Flynn in his Russiagate-spawned legal battle, leveled her own allegations of foreign collusion and election meddling on Fox News’ Lou Dobbs Tonight show on Friday. Threatening those responsible with a “new American revolution,” she called for a sweeping probe into what she described as a longstanding pattern of election interference.

Claiming Dominion Voting Systems, one of the largest makers of voting machines for the US, “was created to produce altered voting results in Venezuela for [socialist leader] Hugo Chavez,” Powell argued that the system – which she said was funded by Cuba and China as well as Caracas – is little more than an election-fixing operation.”

This morning on the Maria Bartiroma show she stated:

“We’re fixin’ to overturn the results of the election in multiple states, and President Trump won by not just hundreds of thousands of votes but by millions of votes that were shifted by this software that was designed expressly for that purpose.  We have sworn witness testimony of why the software was designed.  It was designed to rig elections.  He was fully briefed on it.  He saw it happen in other countries.  It was exported internationally for profit by the people that are behind Smartmatic and Dominion.

They did this on purpose.  It was calculated and they’ve done it before.  We have evidence from 2016 in California.  We have so much evidence I feel like it’s coming in through a fire hose.” 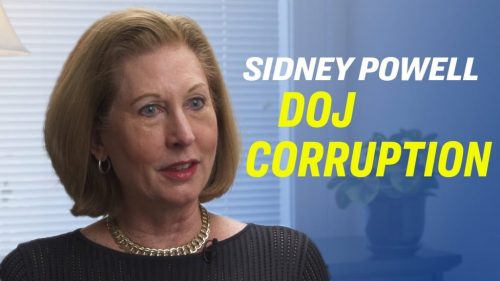 21 responses to “Sidney Powell releases Kraken, “We’re fixin’ to overturn the results of the election in multiple states”, Smartmatic and Dominion software “designed to rig elections””