“I made it absolutely clear that I would go forward with a confirmation process as [Senate Judiciary] chairman, even a few months before a presidential election, if the nominee were chosen with the advice, and not merely the consent, of the Senate, just as the Constitution requires,” ..Joe Biden, Georgetown Law School 2016

“When there is a vacancy on the SCOTUS, the President is to nominate someone, the Senate is to consider that nomination … There’s no unwritten law that says that it can only be done on off-years. That’s not in the Constitution text.”...Barack Obama 2016

“Even if President Trump wants to put forward a name now, the Senate should not act until after the American people select their next president, their next Congress, their next Senate,”...Joe Biden 2020

The NY Times is calling it:

“President Trump has selected Judge Amy Coney Barrett, the favorite candidate of conservatives, to succeed Justice Ruth Bader Ginsburg and will try to force Senate confirmation before Election Day in a move that would significantly alter the ideological makeup of the Supreme Court for years.

Mr. Trump plans to announce on Saturday that she is his choice, according to six people close to the process who asked not to be identified disclosing the decision in advance. As they often do, aides cautioned that Mr. Trump sometimes upends his own plans.

But he is not known to have interviewed any other candidates and came away from two days of meetings with Judge Barrett this week impressed with a jurist he was told would be a female Antonin Scalia, referring to the justice she once clerked for. On Friday night, Judge Barrett was photographed getting out of her car outside her home in South Bend, Ind.

“I haven’t said it was her, but she is outstanding,” Mr. Trump told reporters who asked about Judge Barrett’s imminent nomination at Joint Base Andrews outside Washington after CNN and other news outlets reported on his choice.

From The University of Notre Dame Law School.

“The Honorable Amy Coney Barrett was confirmed as a judge on the U.S. Court of Appeals for the Seventh Circuit in October 2017. She is a Notre Dame Law School alumna and has taught as a member of the Law School’s faculty since 2002.

Judge Barrett teaches and researches in the areas of federal courts, constitutional law, and statutory interpretation. Her scholarship in these fields has been published in leading journals, including the Columbia, Virginia, and Texas Law Reviews. From 2010-2016, she served by appointment of the Chief Justice on the Advisory Committee for the Federal Rules of Appellate Procedure. She has been selected as “Distinguished Professor of the Year” by three of the Law School’s graduating classes.

Before joining the Notre Dame faculty, Judge Barrett clerked for Judge Laurence H. Silberman of the U.S. Court of Appeals for the D.C. Circuit and for Associate Justice Antonin Scalia of the U.S. Supreme Court. As an associate at Miller, Cassidy, Larroca & Lewin in Washington, D.C., she litigated constitutional, criminal, and commercial cases in both trial and appellate courts. Judge Barrett has served as a visiting associate professor and John M. Olin Fellow in Law at the George Washington University Law School,  as a visiting associate professor of law at the University of Virginia and is a member of the American Law Institute (ALI).” 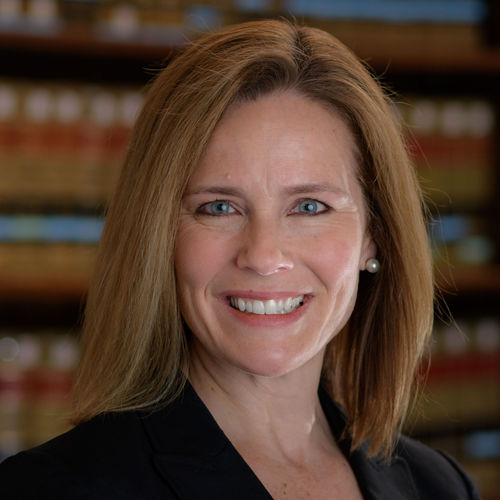