“the Times of the nineteenth of December had published the official forecasts of the output of various classes of consumption goods in the fourth quarter of 1983, which was also the sixth quarter of the Ninth Three-Year Plan. Today’s issue contained a statement of the actual output, from which it appeared that the forecasts were in every instance grossly wrong. Winston’s job was to rectify the original figures by making them agree with the later ones.”…George Orwell, “1984”

“As soon as all the corrections which happened to be necessary in any partiucular number of the Times had been assembled and collated, that number would be reprinted, the original copy destroyed, and the corrected copy placed on the files in it’s stead. This process of continuation alteration was applied not only to newspapers, but to books, periodicals, pamphlets, posters, leaflets, films, sound tracks, cartoons, photographs–to every kind of literature or documentation which might conceivably hold any political or ideological significance. Day by day and almost minute by minute the past was brought up to date. In this way every prediction made by the Party could be shown by documentary evidence to be correct; nor was any item of news, or expression of opinion, which conflicted with the needs of the moment, ever allowed to be on record.”…George Orwell, “1984″

From the CBO January 2012.
“THE ECONOMIC OUTLOOK

In part because of the dampening effect of the higher tax rates and curbs on spending scheduled to occur this year and next, CBO expects that the economy will continue to recover slowly, with real GDP growing by 2.0 percent this year and 1.1 percent next year (as measured by the change from the fourth quarter of the previous calendar year). CBO expects economic activity to quicken after 2013 but to remain below the economy’s potential until 2018.

“Is the ‘real’ unemployment rate stuck?”
Back in December, the Financial Times’s Ed Luce estimated that “if the same number of people were seeking work today as in 2007, the jobless rate would be 11 percent.” Perhaps, many of us wrote at the time, that should be considered the “real” unemployment rate.

Today, Cardiff Garcia notes an unsettling chart from Nomura that compares the unemployment rate we have, where people can drop out of the labor force and thus out of the numbers, to this “real” unemployment rate, where discouraged workers aren’t dropped from the rolls. Worryingly, it’s barely moved:” 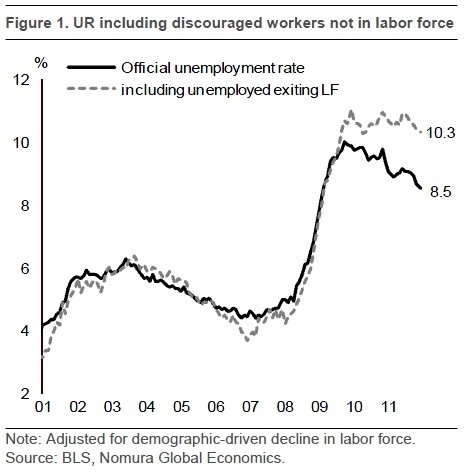 “What is striking about the broken line above isn’t where it now ends — at 10.3 per cent — but rather the lack of any meaningful, sustained improvement for more than two years,” comments Garcia. “This alternative measure has remained above 10 percent since September 2009, and aside from a bit of skittishness (some of which is down to uncaptured seasonality) has mostly just moved sideways.”

“The Obama administration is touting the latest unemployment numbers released last week by the U.S. Department of Labor as proof its policies are working. But a closer look at the actual number of able-bodied people who are willing to work, but do not, reveals a different picture.

As economist John R. Lott has written, not only is the drop in the unemployment rate from 8.5 percent to 8.3 percent still half a percentage point higher than when President Obama took office three years ago, the number of unemployed is also higher. Compared with January 2009 when 11.6 million Americans were jobless, today, writes Lott, “there are 12.8 million unemployed and 43 percent have been out of a job for more than six months. The average length of unemployment has increased dramatically since the recovery started. Back in June 2009, ‘only’ 29 percent of the unemployed had been unemployed longer than six months.”

The way government counts things, slower growth in government spending amounts to a cut. In a similar, misleading fashion, a reduction in the percentage of unemployed people by two-tenths of 1 percent counts as progress, even if it results from wide-scale work force dropout.

Lott examined the Labor Department’s statistics and found that the number of Americans not in the labor force — neither working nor seeking work — grew and was revised upward last month by 1.2 million. Most people who join this category have given up looking for work and are no longer counted as unemployed. That fact skews the statistics to make the employment picture appear better than it is.

Real unemployment is mostly ignored by the major media, which was happy to tout the latest jobless rate reduction as a boon to Obama and a problem for Republican front-runner Mitt Romney. Most reporting has focused on the impression voters might have of an economic recovery, or at least trending in the right direction. The opposite is true and it is up to Romney to make that case.”

“Many in the major media can’t be counted on to tell the truth about the economy if doing so makes Obama and his policies look bad. This means the Republican nominee will have to go over or around the media to make his case. The best way to do this is not with statistics, but with real people.”

“Featuring real people who are out of a job and desperately want to work would help undermine the Democrats as the party of compassion, while simultaneously blunting the Republican stereotype as the party that doesn’t care about the poor.

Democrats seem eager to get more people onto food stamps than to adopt policies that would free them from addiction to government and give them the dignity of a real job and the self-sufficiency that goes with it.”