“And why is Fox News working so hard to kill this story? I wish I could say more “about Fox’s behind-the-scenes treachery — and someday hopefully I will — but rest assured that Malia Zimmerman’s May 17, 2017 story about Mr. Rich was fully vetted by senior Fox management. I repeatedly encouraged Fox’s attorneys to postpone settlement discussions with Seth Rich’s parents until I obtained the FBI records (my client, Ed Butowsky, was a co-defendant with Fox), but Fox was hellbent on settling the case in October / November. That’s around the time Rupert Murdoch publicly joined forces with Joe Biden. Fox had a very strong defense, yet it rolled over and played dead, settling the lawsuit and then firing Ms. Zimmerman. Sooner or later, the full story will come out, and it will be very ugly for Fox News and the Murdoch family.”...Attorney Ty Clevenger

“They found, what he had done, he [Seth Rich] had submitted a series of documents, emails from DNC — and, by the way, all this shit about the DNC, you know, was it a ‘hack’ or wasn’t it a ‘hack’ — whatever happened, it was the Democrats themselves wrote this shit, you know what I mean? All I know is that, he offered a sample, he sends a sample, you know, I am sure dozens of emails, and said ‘I want money’. Later Wikileaks did get the password [SETH RICH DID SELL WIKILEAKS ACCESS INTO HIS COMPUTER.] He had a drop-box, a [password-]protected drop-box, which isn’t hard to do.”…Seymour Hersh

” So why would a “street robbery” investigation need to be classified?”…Attorney Ty Clevenger July 22, 2020

From a recently released redacted FBI email we learn that Perkins Coie, legal counsel to the DNC, Hillary Clinton et al, provided a copy of Seth Rich’s laptop to the FBI.

Why did they have it? 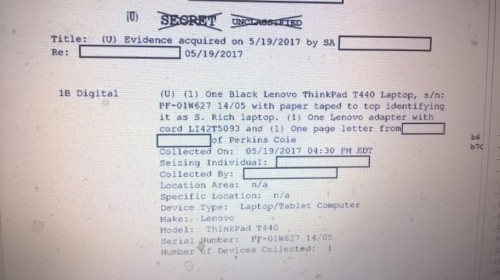 “Why Did Perkins Coie Have a Copy of Seth Rich’s Laptop?

One of the top weapons in the arsenal of deception is time. Big Lies + Time = False Narrative. Batter the truth long enough and there comes that point after which a smoking gun and other evidence matter little more than any other point of argument, perhaps to be won, yes, but to be savored only as the emptiest of victories. Or, rather, the loneliest of victories. The train has left the station and there are just a few stragglers on the platform to notice.

Certainly, this is the case with the excruciatingly slow extraction of the truth around the murder of Seth Rich and the efforts to hide and distort it by Surveillance Police State Media Complex for the past five years. Thanks in large part to the dogged efforts of plaintiff Ed Butowski, his lawyer Ty Clevenger, Judicial Watch and to the big fat mouths of Michael Isikoff, Ellen Ratner and Deborah Sines, we have more basic information about the FBI, Mueller team and US Attorney investigations and cover-up of the Seth Rich affair.

But this train left the station so long ago there isn’t even a station anymore. But to pick up the tracks …

Deborah Sines was an assistant US attorney assigned to be the lead prosecutor in the Seth Rich muder case. Her post-retirement interview with Michael Isikoff for his podcast “Conspiracyland” added to our understanding of the cover-up, as refined in a deposition conducted by Ty Clevenger.

Sines discussed her comments that she gave to Michael Isikoff (noted below) and confirmed that they were true but then states that she should not have said those things and she would not be able to provide more information on the statements.  She confirmed that the FBI did examine Seth Rich’s computer and that she met with an FBI Agent and a prosecutor from the Mueller gang.

The truth, battered for years, will out.

This indicates that there should be a form 302 floating around with information from the discussion with the FBI and Mueller gang and also it confirms that Mueller did not mention this in his report.

A new “declassification” of heavily censored (“redacted”) Seth Rich documents (which, as noted above, the FBI crucial years denying they even possessed) does seem to include a write-up of this meeting titled “Sensitive Matter – Meeting with AUSA [Assistant US Attorney].”

The meeting took place on March 15, 2018 at the US Attorney’s Office for the District of Columbia between an FBI special agent, an AUSA, likely Sines, and an attorney with Mueller’s Special Counsel office, Heather Alperino. A trifecta of cover-up.”