“Other payments which are disclosed on Bladen County Improvement Association PAC contribution reports include
the following:

“The end justifies the means, the template of the left.”…Citizen Wells

“We control life, Winston, at all its levels. You are imagining that there is something called human nature which will be outraged by what we do and will turn against us. But we create human nature. Men are infinitely malleable.”…George Orwell, “1984″

The NC Governor race between Governor Pat McCrory and Attorney General Roy Cooper is still tight. So tight that after the canvassing Friday there are reported to be only 6,600 votes separating them. That allows a recount under NC Law.

However, the much bigger story is voter fraud being documented, investigated and protested.

“A formal protest has been filed with the Bladen County Board of Elections to challenge several hundred apparently fraudulent absentee ballots cast for Roy Cooper and other Democrats in Bladen County. Initial evidence laid out in the protest suggests a “massive scheme to run an absentee ballot mill involving hundreds of ballots, perpetrated by and through the Bladen County Improvement Association PAC,” a political action committee funded by the N.C. Democrat Party and other prominent statewide Democrats.

The protest, filed by Bladen County Soil and Water Conservation District Supervisor McCrae Dowless and corroborated by a forensic handwriting expert, notes “shocking evidence resulting from a blatant scheme to try to impact the voting results of an entire county and perhaps even sway statewide and federal elections,” including the gubernatorial race.” 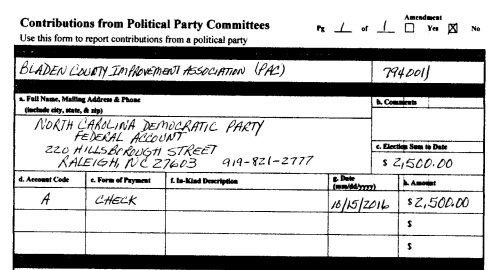 “6. Does this protest involve an irregularity or misconduct not described in number 5 above? If so, please give a detailed description of such misconduct or irregularity and name those who committed such action.
Yes. The voters of Bladen County, North Carolina, appear to be the victims of a massive scheme to run an absentee ballot mill involving hundreds of ballots, perpetrated by and through the Bladen County Improvement Association
PAC.

Upon in-person visual review of mail-in absentee ballots by a forensic handwriting expert, it appears that literally hundreds of fraudulent ballots were cast. These ballots all appear to have been cast in support of a ticket of
candidates, but in particular for a write-in candidate for the Bladen County Soil and Water Conservation District Supervisor. Despite the unusually large number of ballots cast for a particular write-in candidate named Franklin
Graham, it appears that out of the hundreds of ballots reviewed that voted for Mr. Graham, the handwriting on hundreds of those ballots matches only about a dozen handwriting styles.

In particular, one very active absentee ballot “witness,” Deborah Monroe, who was apparently personally validating validated at least 67 mail-in absentee ballots, appears to have written in “Franklin Graham” as a write-in candidate at
least 71 times. In further shocking evidence of this scheme, the Bladen County Improvement Association PAC filed reports with the North Carolina State Board of Elections admitting they that it paid Ms. Monroe multiple payments
totaling $550 for “G.O.T.V.” See Attachment at 8, 23, 47.

Other payments which are disclosed on Bladen County Improvement Association PAC contribution reports include
the following:

Several other batches of mail-in absentee ballots of between 5 and 15 have handwriting samples that appear to match.

These are not simply helpful individuals who have attempted to assist a large swath of Bladen County’s voters to cast their ballots. This is the shocking evidence resulting from a blatant scheme to try to impact the voting results of
an entire county and perhaps even sway statewide and federal elections. This is clear from the fact that only a very few of the voter assistance sections of these mailed-in absentee ballots have been completed, despite being
completed by just a few individuals.

Therefore, it appears that a surprisingly small number of individuals were responsible for casting a very large number of ballots. Few of these ballots were properly indicated as having been completed with assistance by a third
party.

I will also be submitting a report from a Forensic Document Examiner that details much of the handwriting analysis outline above. That will be submitted under separate cover as soon as the report is completed.”