“The unemployment rate would be even higher than it is now had participation in the labor force not declined as much as it has over the past few years. The rate of participation in the labor force fell from 66 percent in 2007 to an average of 64 percent in the second half of 2011, an unusually large decline over so short a time. About a third of that decline reflects factors other than the downturn, such as the aging of the baby-boom generation.

But even with those factors removed, the estimated decline in that rate during the past four years is larger than has been typical of past downturns, even after accounting for the greater severity of this downturn. Had that portion of the decline in the labor force participation rate since 2007 that is attributable to neither the aging of the baby boomers nor the downturn in the business cycle (on the basis of the experience in previous downturns) not occurred, the unemployment rate in the fourth quarter of 2011 would have been about 1¼ percentage points higher than the actual rate of 8.7 percent.”…Congressional Budget Office

“the Times of the nineteenth of December had published the official forecasts of the output of various classes of consumption goods in the fourth quarter of 1983, which was also the sixth quarter of the Ninth Three-Year Plan. Today’s issue contained a statement of the actual output, from which it appeared that the forecasts were in every instance grossly wrong. Winston’s job was to rectify the original figures by making them agree with the later ones.”…George Orwell, “1984″

With my math and computer science background and awareness of Orwellian wordsmithing by the Obama camp, I couldn’t help but notice what is going on with jobs and unemployment reporting. Another huge clue has been the emphasis from the mainstream media, i.e., “The lady doth protest too much me thinkst.”

Obama continues to tout the jobs being created without ackowledging the jobs lost. However, the biggest bit of Orwellian spin is referencing a drop in the unemployment rate and ignoring a historic drop in the labor force participation rate.

“Both the number of unemployed persons (12.5 million) and the unemployment
rate (8.1 percent) changed little in April.”
“The civilian labor force participation rate declined in April to 63.6 percent,
while the employment-population ratio, at 58.4 percent, changed little.”

A labor force participation rate of 63.6 percent is significant.

The labor force participation rate was 66 percent in 2007 when the Democrats took control of Congress.

From the Federal Reserve Bank of San Francisco November 2, 2007.

“the current consensus forecast among government agencies is that labor force participation will level off at around 66% and stay flat for the foreseeable future.”

The labor force participation is 63.6 percent!

Set your Orwell decoder ring to the proper settings. 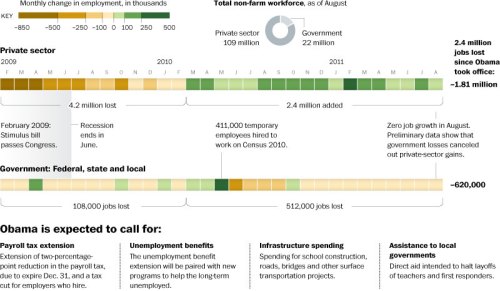