Tag Archives: Where is Donald Trump?

“In December 2014 there were 18 million immigrants (legal and illegal) living in the country who had arrived since January 2000. But job growth over this period was just 9.3 million — half of new immigration.”…Center for Immigration Studies February 2015

“There’s no other way to say this. The official unemployment rate, which cruelly overlooks the suffering of the long-term and often permanently unemployed as well as the depressingly underemployed, amounts to a Big Lie.”…Gallup CEO Jim Clifton

Citizen Wells has been warning you for many months about the decimation of white American employment under Obama.

Zero Hedge presents the real employment changes in November 2015 and since December 2007.

“326,000 Native-Born Americans Lost Their Job In November: Why This Remains The Most Important Jobs Chart”

“Friday’s release of a “just right” jobs report, in which the US economy reportedly added 211,000 jobs, more than the 200,000 expected, solidified its position as the “most important” one in recent years, after it was broadly interpreted by economists as the sufficient condition for the Fed to hike rates on December 16, 7 years to the day after the same Fed cut rates to zero.

As such, if indeed the Fed does hike, over the next several quarters, the US labor data will take a secondary place in terms of importance unless, of course, it plummets in which case the Fed will be forced to quickly undo its tightening policy and go back to ZIRP if not NIRP and more QE.

However, even as the Fed’s “data (in)dependent” monetary policy takes on secondary relevance as we enter 2016, one aspect of the US jobs market is certain to take on an unprecedented importance.

We first laid out what that is three months ago when we said that “the one chart that matters more than ever, has little to nothing to do with the Fed’s monetary policy, but everything to do with the November 2016 presidential elections in which the topic of immigration, both legal and illegal, is shaping up to be the most rancorous, contentious and divisive.”

We were talking about the chart showing the cumulative addition of foreign-born and native-born workers added to US payrolls according to the BLS since December 2007, i.e., since the start of the recession/Second Great Depression.

Curiously, it is precisely this data that got absolutely no mention following yesterday’s job report, about which the fawning mainstream media only noted, in passing, one negative aspect to the report: the fact that 319,000 part-time jobs for economic reasons were added in November. However, with Trump and his anti-immigration campaign having just taken the biggest lead in the republican primary race, we are confident that the chart shown below will soon be recognizable to economic and political pundits everywhere.

And here is why we are confident this particular data should have been prominently noted by all experts when dissecting yesterday’s job report: according to the BLS’ Household Survey, while 375,000 foreign-born workers found jobs in November, a whopping 326,000 native-born Americans lost theirs.” 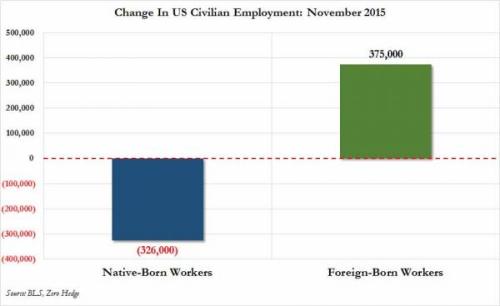 Where is Donald Trump on this?

These are some of the most earth shattering, relevant stats ever revealed.