“I watched her on countless occasions blatantly lie to the American people and knowingly lie.”…Linda Tripp

“By July 1993, the Clintons and their associates had established
a pattern of concealment with respect to the Clintons’ involvement
with Whitewater and the Madison S&L. Because of the complexity
of the allegations of misdeeds involving these institutions, documents
and files are critical to any inquiries into the matter. Yet,
at every important turn, crucial files and documents ‘‘disappeared’’
or were withheld from scrutiny whenever questions were raised.…Senate Whitewater report June 13, 1996

“Millions of cretinous and amoral Americans still admire Bill and Hillary Clinton, the two foulest amoral slimebags that have ever besmirched the White House. These two foulmouthed and lying psychopaths have been, and still are, blindly supported by masses of non-clinical morons, diehard Democrats, and whorish liberal journalists and their editors.

The Clintons’ habitual lies, gutter language, anti-Semitic outbursts, and anti-black slurs have been documented by reliable writers but have been — and still are — routinely suppressed by the so-called liberal media.”…Reinhold Aman, Ph.D.

“However, Hillary is exposed as being the complete opposite of her husband and daughter, and instead is reportedly very rude and acted nasty toward a number of agents.

‘Hillary was very rude to agents, and she didn’t appear to like law enforcement or the military,’ former Secret Service agent Lloyd Bulman recalled to Kessler.

‘She wouldn’t go over and meet military people or police officers, as most protectees do.

‘She was just really rude to almost everybody. She’d act like she didn’t want you around, like you were beneath her.’

On another occasion, a member of the uniformed Secret Service once cheerfully greeted Mrs Clinton by saying ‘Good morning, ma’am.’

‘F*** off,’ is how she replied, according to Kessler’s book.

Kessler explained in the book that when Mrs Clinton is in public, she smiles and acts graciously.

‘As soon as the cameras are gone, her angry personality, nastiness, and imperiousness become evident,’ he wrote.

‘Hillary didn’t like the military aides wearing their uniforms around the White House,’ one former agent recounted to Kessler.

Dan Emmett, who began covering President Clinton on his first day in office in January 1993, said Hillary was arrogant, never said ‘thank you’ to the agents and treated them like ‘hired help’. “ 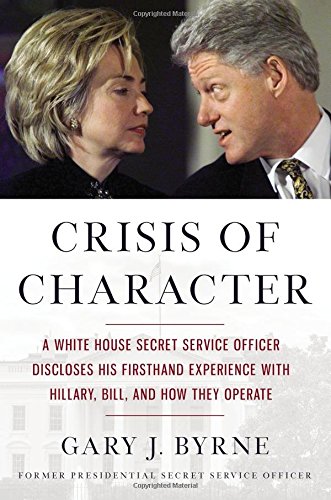 Posted directly outside President Clinton’s Oval Office, Former Secret Service uniformed officer Gary Byrne reveals what he observed of Hillary Clinton’s character and the culture inside the White House while protecting the First Family. Now that a second Clinton administration threatens — their scheme from the very beginning — Byrne exposes what he saw of the real Hillary Clinton.

While serving as a Secret Service Officer, Gary Byrne protected President Bill Clinton and the First Family in the White House and outside the Oval Office. There, he saw the political and personal machinations of Bill and Hillary Clinton and those who were fiercely loyal to them. In CRISIS OF CHARACTER Byrne provides a firsthand account of the scandals–known and unknown–and daily trials ranging from the minor to national in scale.

Having witnessed the personal and political dysfunction of the Clinton White House–so consumed by scandal and destroying their enemies, real and imagined–Byrne came to understand that, to the Clintons, governing was an afterthought. He now tells this story–before voters go to the polls–in the hopes that Clinton supporters will understand the real Hillary Clinton.”

A just-retired Secret Service agent who spent five years on
Hillary Clinton’s protective detail has told a Newsmax source
that “only one word adequately describes that woman: witch.”

This is but the tip of the iceberg. In my Predictions column at
the end on 2000 I predicted that in the coming months and years
we will be inundated, finally, with the truth about the
absolutely awful behavior of Bill and Hillary Clinton.

Not just the criminal stuff, but the boorish, rude, arrogant,
condescending and demeaning behavior that comes from insecure
low-lifes who suddenly find themselves living in the White House.

The Clintons, we are certain to learn, treated the domestic staff
horribly. These are the valets, maids, porters, cooks, drivers,
baggage handlers and other permanent White House personnel who
are assigned to the “Residence”, the living quarters of the
First Family.

The Clintons undoubtedly treated these folks rudely, abruptly and
with contempt.

Hillary’s famous “I could have stayed home and baked cookies”
remark belies her contempt for household chores, and those who
perform them.

So this Secret Service agent’s observation is a glimpse into what
we can expect in the future: books, articles and interviews with
White House personnel after they retire.”