VP Pence letter to Congress January 6, 2021 is valid if “we count the votes of the Electoral College…in a manner consistent with our Constitution, laws”

VP Pence letter to Congress January 6, 2021 is valid if “we count the votes of the Electoral College…in a manner consistent with our Constitution, laws”

“Until these unlawful practices are acknowledged and corrected, we cannot agree to support electors chosen based upon an inaccurate total vote count. The voters of Pennsylvania deserve integrity in the election process and equal protection under the law.”…PA Congress Members Dec 31, 2020

“Resolved, That the members of the Wisconsin State Assembly place the
redress to these and other election law violations and failed administrative procedures as its highest priority and shall take up legislation crafted to ensure civil officers follow the laws as written.”...Wisconsin Assembly Resolution 3

“These are the times that try men’s souls. The summer soldier and the sunshine patriot will, in this crisis, shrink from the service of their country; but he that stands now, deserves the love and thanks of man and woman. Tyranny, like hell, is not easily conquered; yet we have this consolation with us, that the harder the conflict, the more glorious the triumph.”…Thomas Paine

Many people are upset with VP Pence after the release of his letter dated January.

He is being called a traitor and other names.

If he does what he states in the letter, he will fulfill his constitutional duty.

Following the will of the American people as manifested by the actions of the state legislatures which have plenary power.

What this means is that he does not accept the will of corrupt governors, secretaries of state and members of the judiciary.

The state “certifications” of December 14 are not sacred, cast into stone.

Many legislatures, acting on citizen demands for honesty in elections, have examined their results and have stated in legal documents that their certified results are invalid.

These must not be counted per the US Constitution.

If not, he should be handcuffed and arrested for treason.

Increasingly it has been discovered that foreign nations were meddling in our elections.

To count invalid votes would aid and abet a foreign country.

Also, some of these states, such as Wisconsin, which has a legislative resolution, are in the midst of addressing their errors.

I agree that Pence does not have arbitrary power to disregard elector votes.

He also must not ignore constitutionally invalid ones. 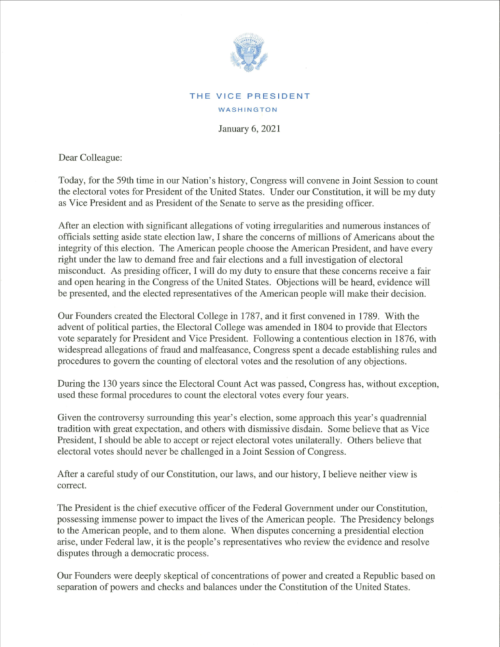 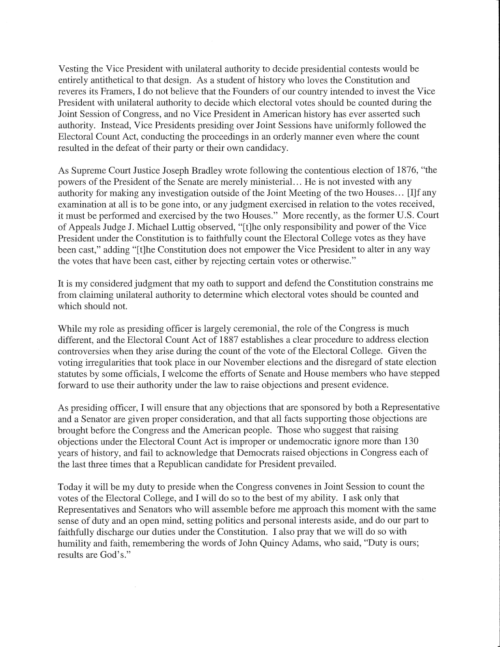 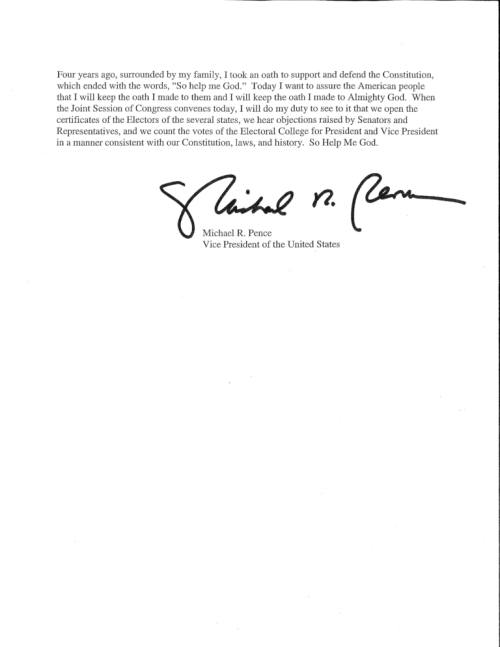 This entry was posted in Accountability, Board of Elections, Citizen News, Citizens for the truth about Obama, CitizenWells, Civil rights, constitution, Election 2020, Election Boards, Election Law, Election update, Electoral College, Electors, US Constitution, US House of Representatives, US Senate, Voter fraud, voters and tagged 2021 is valid if "we count the votes of the Electoral College...in a manner consistent with our Constitution, laws, VP Pence letter to Congress January 6. Bookmark the permalink.

9 responses to “VP Pence letter to Congress January 6, 2021 is valid if “we count the votes of the Electoral College…in a manner consistent with our Constitution, laws””