Gary Byrne Hillary ‘Fainting’ video really scares me, Former secret service agent protected Clintons, Something seriously wrong with Mrs. Clinton, Pneumonia or overheating are highly suspect excuses, She is being treated by her own private medical specialists in secret

Gary Byrne Hillary ‘Fainting’ video really scares me, Former secret service agent protected Clintons, Something seriously wrong with Mrs. Clinton, Pneumonia or overheating are highly suspect excuses, She is being treated by her own private medical specialists in secret

“The main stream media has been doing it’s best to hide the truth about Hillary Clinton’s rapidly deteriorating health, but it’s getting to be a harder and harder trick to continue to pull off. Just yesterday the Twitterverse lit up with photographs of her seemingly unable to make it up a flight of steps as seen here”…nowtheendbegins.com

“I protected First Lady Hillary Clinton, President Bill Clinton, and their family while I served in the Secret Service Uniform Division as an officer from 1991-2003.

By now, you have most likely seen the startling video of Hillary Clinton ‘fainting.’ Through the lens of my 29-year-career in The Service, I can see what a naked-eyed media pundit cannot: There is something seriously wrong with Mrs. Clinton.

Pneumonia or overheating are highly suspect excuses and I’ll explain why.

My analysis is not partisan. I cared for and protected the Clintons for many years. It was my duty to guard Mrs. Clinton in the Secret Service and I was so close to the First Family that the Supreme Court subpoenaed me to testify on the details of Bill Clinton’s late-term scandals.

These are the facts.

Watch Clinton’s Secret Service’s detail in the video. Their behavior is extremely professional and very telling. Each agent is to be commended.

At the beginning of the video, Hillary is with a protective detail of Secret Service agents, as well as two female staffers. One staffer stands very close at her back and another is shoulder-to-shoulder and arm-in-arm with Mrs. Clinton to give her balance and prop her up. 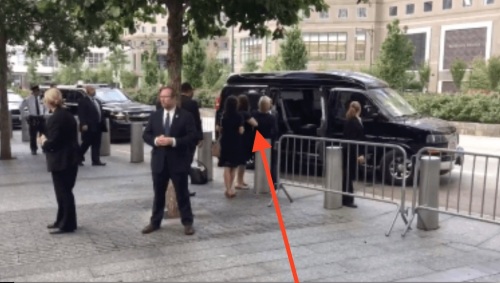 Mrs. Clinton leans against a “ballard,” the metal columns we use to stop incoming 5-ton vehicles, and “bicycle racks” (our nickname for the portable metal fences) to restrict pedestrian access to an area.Screen Shot 2016-09-12 at 4.00.33 PM

As the van pulls up, she has a rigid wavering posture. She awkwardly leans on the ballard and stares straight ahead with her neck craned and extended up as her body is supported at the side and rear by her staffers.

One agent gets the door, but no one moves to enter. The Secret Service doesn’t like to wait—standing still in the eyes of the Service is waiting for an attack to happen. But the staffer can’t move Mrs. Clinton. Anything that holds up a motorcade is extremely dangerous and anything that ties up a Secret Service agent’s hands from drawing their pistol or intervening a threat is a hazard.

The female agent at the front of the van is scanning. She sees Mrs. Clinton odd behavior as well. The female agent begins backing up to the entrance of the van to shield both sight and anyone approaching—as is procedure. She keys her mic signaling that the van is about to move. The agent is to be commended for maintaining her blank expression. 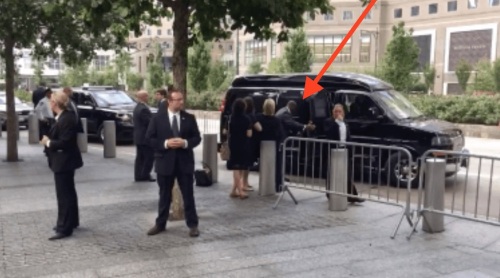 The agent who opened the door moves to take the place of the staffer and take Mrs. Clinton’s arm, but as they switch control, she nearly falls completely. The bald agent, who I believe is the shift leader, knows what is going on with Mrs. Clinton and – this oddity is very telling – crosses between her and her exit (the van door).

As Mrs. Clinton jerks back and forth and her legs fold, the bald agent takes her right arm. The staffer also tries to also grab underneath Mrs. Clinton’s armpits to lift Mrs. Clinton.

Close examination of Mrs. Clinton’s legs reveal her feet and legs have extended and are not holding her weight at all. The toes of her right foot drag and skid on the pavement. As they lift and push her forward, her legs don’t keep up and she falls forward again, yet they can’t lift her too high as to risk smacking her head. Any Officer or protection agent knows the risk of that. 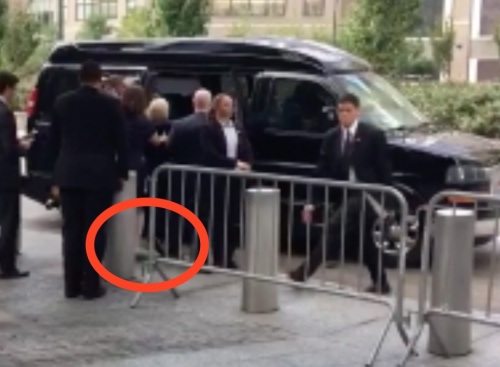 That is when all the other agents, especially this young jet-black haired one, convene to shield her from view completely. We call this “collapsing on” the protectee. They left in such a hurry to get her from the public view that her shoe—which she could not retain—was left behind.

After 9/11, Dick Cheney spoke of how his security detail, when moving him to a secure area, lifted him by his Secret Service issued un-snap-able belt, which is used to lift and move a protectee to where they wanted the person to go.

Hillary Clinton was not wearing this standard issue belt.

So what did we hear after? At first it was that she overheated and dehydrated. Now it’s pneumonia. Before, videos of her similar spastic bizarre movement were blamed on allergies and other excuses. Clearly, the totality of her prior blood clots and deep vein thrombosis, along with her concussion and related broken elbow, tell a different story.

Here’s what was very disturbing to me: after the medical episode, she went to her daughter’s apartment and not to an Emergency Room. Secret Service procedure for each detail dictates that everyone knows which hospital to go to depending on the event – heart failure, gunshot, you name it. It is very revealing that, whatever is wrong with her, she is being treated by her own private medical specialists in secret and, judging by the ballet-like reaction by her detail, they have dealt with this before.”

This entry was posted in Citizen News, Citizens for the truth about Obama, CitizenWells, Clintons, Hillary Clinton, Secret Service and tagged Former secret service agent protected Clintons, Gary Byrne Hillary 'Fainting' video really scares me, Pneumonia or overheating are highly suspect excuses, She is being treated by her own private medical specialists in secret, Something seriously wrong with Mrs. Clinton. Bookmark the permalink.

14 responses to “Gary Byrne Hillary ‘Fainting’ video really scares me, Former secret service agent protected Clintons, Something seriously wrong with Mrs. Clinton, Pneumonia or overheating are highly suspect excuses, She is being treated by her own private medical specialists in secret”