“Sooner or later someone in the US will come in contact with Ebola contagion & go undetected. They will then infect many others.”…Citizen Wells

“Barack Obama is endangering the children of the US and now our troops. Where is the outrage?”…Citizen Wells

“You can see that these doctors, who are highly trained people, got themselves infected,”
“So sending troops into an area, if they’re dealing one-on-one with a patient, they’re not going to be able to protect themselves very well. It’s not easy to [prevent transmission], because you get tired and you get careless and you make some simple mistakes. All it takes is one virus particle.”…Dr. Lee Hieb, former president of the Association of American Physicians and Surgeons

New York City police officers were sent to mark of Dr. Craig Spencer’s Harlem apartment building today
Spencer is the first confirmed patient with Ebola in the city
After the officers were done, they were seen throwing their gloves, masks and caution tape in a public trash can on the street”

“The photos and video, all shot before Spencer’s Ebola was actually confirmed, do not show whether these officers actually entered his building.

However, some are suggesting that for the sake of safety – not to mention public sanity – it would have made sense to discard of these masks and gloves and tape in a biohazard bag.” 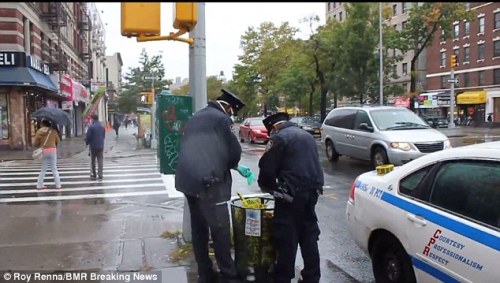