‘My father would have said, ‘They ain’t nothing but devils.’ My father said, ‘All lives matter.’ I don’t think he’d agree.”     Of the BLM movement, Ali Jr., a Muslim like his father, said: “I think it’s racist.”…Muhammad Ali’, Jr.

“I find it sad that the media and some neighbors are constantly focused on skin color and race.”…Citizen Wells

A sane and moral person believes that All Lives Matter and is not constantly focusing on skin color.

I would not put a White Lives Matter sign in my yard.

Perhaps the people who put Black Lives Matter signs in their yards have “White Liberal Guilt” or perhaps they are fearful of many of the folks tied to the racist/marxist/criminal organization whose actions are reminiscent of modern day Nazi Brownshirt thugs.

The people constantly focusing on skin color and race are the biggest racists out there.

“Jenny Erausquin wishes she could have a conversation with the person who wrote her an anonymous letter, condemning the sign in her front yard that supports the Black Lives Matter movement.

The typed, one-page missive was addressed directly to Erausquin, who posted it to her Facebook page after receiving it a week ago. In the letter, the writer says they were recently driving on Erausquin’s street when they noticed her sign.”

“The letter writer didn’t argue with any of the other slogans, but spent several paragraphs deriding Erausquin’s support of the Black Lives Matter movement.

“You must be completely oblivious,” they wrote, “to the reality that BLM is a Marxist revolutionary group that wants to overthrow our government. You should have to face the consequences of what you are supporting.”

“The letter continues with criticism of the Black Lives Matter movement, concluding that “this is the same BLM you celebrate with the sign in your yard because it makes you feel virtuous. You and your yard sign are disgusting.”

The letter is signed: “A police officer who you may someday call, if at night while you are sleeping, intruders break into your home and you are in fear of your life.”
“Read more:
https://greensboro.com/i-find-it-sad-anonymous-letter-writer-condemns-greensboro-familys-yard-sign/article_574a37a8-0a69-11eb-8fcf-f3373ef70a62.html

I find it sad that the media and some neighbors are constantly focused on skin color and race. 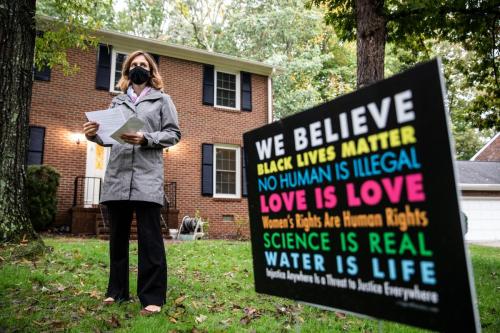 Posted in Americans, Citizen News, Citizens for the truth about Obama, CitizenWells, racism