“Nothing can now be believed which is seen in a newspaper.
Truth itself becomes suspicious by being put into that
polluted vehicle.”…. Thomas Jefferson

She has been “throwing stones” at Brett Kavanaugh but apparently she “lives in a glass house.”

After reading the Washington Post article about her allegations, a series of red flags were raised and reported here on September 18, 2018.

Let’s begin with the obvious:

Another red flag, i.e. what was she hiding.

An issue of honesty was emerging.

From my exposure to Psych 101 and other research I knew that human memories were extremely fallible.

Ms. Ford was educated on this matter and not being honest in her portrayal of “facts.”

“We tend to think that memories are stored in our brains just as they are in computers. Once registered, the data are put away for safe-keeping and eventual recall. The facts don’t change.

But neuroscientists have shown that each time we remember something, we are reconstructing the event, reassembling it from traces throughout the brain. Psychologists have pointed out that we also suppress memories that are painful or damaging to self-esteem. We could say that, as a result, memory is unreliable. We could also say it is adaptive, reshaping itself to accommodate the new situations we find ourselves facing. Either way, we have to face the fact that it is “flexible.”

For most of us that usually means we recall a rosier past than we actually had, though some of us are tormented by memories of a painful past we can’t shake and that seems to get worse every time we revisit them. But for all of us that means an incomplete past.

Nothing brings this home better than the memories of witnesses in trials, one of the cornerstones of our legal system. All too many people have been put behind bars on the testimony of witnesses, who when challenged by more objective data have been later proved to be misremembering.”

“There is always the danger of Groupthink. But if you encourage disagreements and challenges, you are not only likely to avoid conformity but get better results.”

Oops, it appears that Christine Blasey Ford has an even bigger problem.

It appears that her high school yearbooks were scrubbed and retrieved.

From Cult of the 1st Amendment.

“The resistance media has been singularly focused on Brett Kavanaugh’s high school yearbooks, which imply that he got drunk and threw up. There’s no need to imply anything from the Holton-Arms yearbooks. It’s all there in focus, and the written word too. All of the sordid details as approved for publication by a “look the other way” faculty. And now it’s available for historical/evidentiary review.

It is to this wild Holton culture we must look in order to shed light on the last minute accusation by Christine Blasey. And in the official high school chronicles of this era, we find many names of people who can provide relevant evidence.

Christine “Chrissy” Blasey alleges she cannot recall the exact date, place or names of people who were at the party in question. This research is intended to refresh her recollection and the recollections of others who may recall key facts. (In this report, last names have been redacted and faces obscured, other than the picture of Chrissy Blasey seen below.)

The yearbook title is SCRIBE. The relevant issues are SCRIBE 82, SCRIBE 83 and SCRIBE 84, corresponding to Blaseys’s sophomore, junior and senior years, when she and her classmates (and Kavanaugh) were 15-17 year old juveniles.

While preparing this report, I came across a biased viral article from Heavy.com that portrays Christine Blasey and Holton-Arms as the very essence of high school purity. As for the school itself, when Blasey attended it, nothing could be further from the truth, as you will see below.”

“Lastly one cannot fail to mention the climax of the junior social scene, the party. Striving to extend our educational experience beyond the confines of the classroom, we played such intellectually stimulating games as Quarters, Mexican Dice and everyone’s favorite, Pass-Out, which usually resulted from the aforementioned two.”

“The Halloween party pictured above would have taken place within sixteen weeks of the alleged assault, which Blasey claims happened in the Summer of ’82, after her sophomore year. “

“1982 was a particularly wild year and Scribe 82 published multiple pictures of minors drinking heavily, beer cans stacked up, liquor repeatedly glorified, “boys, beer and “the ‘Zoo’ atmosphere”. The caption on the right side of the image mocks the faculty and parents, “Come on, you’re really too young to drink.”” 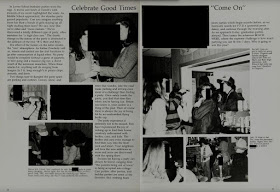 Numerous passages in the yearbooks discuss the drunken keg parties held while parents were away from home: 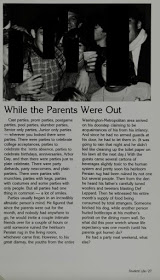 There is much more & I urge you to read it.