What I am about to present is intended primarily for the Doubting Thomases out there. First some observations. Jesus was born in the Middle East. His skin color, neither lilly white or black, was average. He was born into a lowly existence and therefore could speak to everyone regardless of status. His message is simple and true. I can find no fault with it. He was crucified. No other method of death would have gotten the attention of humans. If that is not enough for you, I have studied the Shroud of Turin for years. I believe that it is real.

Is this the face of Jesus? 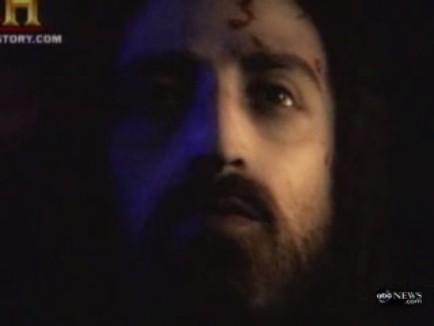 From the History Channel

“What did Jesus look like? Artists, scholars and millions of Christians around the world have been pondering the question for centuries. And on Tuesday, March 30, at 9/8c, HISTORY viewers may get closer to an answer than ever before, thanks to a special two-hour event.

The Real Face of Jesus? follows a team of graphic experts as they use cutting-edge 3D software to bring a holy relic known as the Shroud of Turin to life. Many believe Jesus Christ was buried in this ancient linen cloth, which bears traces of blood and the faint, ghostly image of a man. With the help of modern technology, can HISTORY finally unlock the secrets of one of the world’s most scrutinized and controversial artifacts?

To attempt this feat, HISTORY turned to computer graphics artist Ray Downing of Studio Macbeth, who used photographs and digital animation to reconstruct Abraham Lincoln in 2009. As Ray and his team grapple with the task, we delve into the Shroud of Turin’s long history, along with the many perplexing questions that centuries of scientific research have failed to settle. How, for instance, did the figure’s imprint appear on the cloth? And how can we extract 3D information from a two-dimensional piece of linen?

In The Real Face of Jesus?, HISTORY unveils the fruit of many months of labor, made possible by sophisticated computer tools in very capable hands: an accurate depiction of the man many believe to be Jesus Christ. For the devout and curious alike, this is a compelling story of transformation—a fascinating journey from the realm of creativity and imagination into the domain of science and technology.”

“The advent of photography in the late 19th century forever altered the course of the shroud’s history. In 1898, a lawyer named Secondo Pia took the first known photograph of the cloth, and his negative revealed new details—including strikingly clear facial features—that could not be observed with the naked eye. Scientific interest in the relic immediately picked up. In 1902, the French anatomist Yves Delage, an agnostic, inspected the photographs and pronounced that the figure on the shroud was indeed Jesus Christ.

The first direct examinations of the cloth were conducted in the 1970s, most famously by the Shroud of Turin Research Project (STURP), a team of scientists led by physicist John P. Jackson of the University of Colorado. The group found that the markings on the cloth were consistent with a crucified body and that the stains were real human blood; they also suggested that the image’s shading patterns contained three-dimensional information. They could not explain how the imprint ended up on the fabric in the first place.

In 1988, scientists removed a swatch of the shroud for radiocarbon testing. Three independent laboratories concluded that the material originated between 1260 and 1390, leading some to deem it inauthentic. Since then, however, further studies have cast doubt on those results, suggesting that the shroud may indeed date back to the time of Jesus Christ’s life and death.

In March 2010, researchers unveiled a revolutionary radiocarbon dating method that could allow scientists to safely establish accurate ages for precious artifacts like the Shroud of Turin. Unlike traditional carbon dating, the new process does not require samples; instead, the entire object is exposed to an electrically charged gas that gently oxidizes its surface without causing damage. This means that, someday soon, the world may have a more precise estimate of the Shroud of Turin’s real age.

In the spring of 2010, the Shroud of Turin will be available for its first public viewing in 10 years, scheduled from April 10 to May 23.”

After reading numerous books and articles on the Shroud of Turin beginning over 30 years ago, I found a book that convinced me that the Shroud could be authentic. Mark Antonacci wrote and published “The Resurrection of the Shroud” in 2000. From the preface:

“It actually began out of nowhere on a Sunday afternoon. I had just had a serious argument with a girlfriend. The problem was that she was religious, and I was not. She was very committed to her religious views, and I was definitely a committed agnostic. Because it was over a matter that threatened our relationship, it caused me great anxiety. Not wanting to hang around the apartment and continue to think about it all day, I decided to go to work at my law office to take my mind off the argument.

When I got to my office, I couldn’t concetrate on my work. Hoping to get my mind off the disagreement, I decided to go across the street and catch some lunch at Hummel’s, my favorite restaurant, and read the paper. On the way I happened to buy a particular newspaper for the only time in my life.

As I was moving down the serving line at Hummel’s with the newspaper on my tray, I couldn’t help but notice the words across the top of the paper, advertising what was inside the weekend edition. In the upper right-hand corner was a facial picture of the man on the shroud; next to it, a caption asked if this was a picture of the historical Jesus Christ. The paper was featuring an article on a recently published book about the Shroud of Turin. The picture was staring up right at me, and as I went down the line, I muttered to myself, “Great, this is just what I need.”

“I did not like seeing this picture and being reminded of the subject and the argument, so I pushed the paper a little bit away from me. As I continued reading, I noticed the picture again and pushed the paper farther away still. I did the same thing another time until, noticing the picture yet again, I finally said, “all right, I’ll read the !$#?% article,” and angrily threw down the sports page and picked up the article on the shroud.”

From an interview posted on Amarillo.com on April 14, 2001

“Mark Antonacci said he was a committed agnostic until he stumbled upon an article about a subject he would eventually spend nearly 20 years researching.
Antonacci, a St. Louis lawyer, is author of “The Resurrection of the Shroud.” He spoke in a telephone interview about his book about the cloth that he and others believe wrapped the body of Jesus Christ.
His book delves into questions about the wounds suffered by the man whose impression is on the shroud, the shroud’s history and scientific challenges to the carbon dating of the shroud.
Now a Christian, Antonacci said much historical, medical and archaeological evidence exists to prove Christ’s death was consistent with Gospel accounts. The evidence he said he found changed his mind about God.
“I came to the conclusion that the literal, actual crucifixion and resurrection of Jesus Christ occurred,” he said.”

“With the passing of a generation of research and development, science may now be able to move beyond the question of authenticity and prove some of the most startling events in history, while disproving the results of the Shroud’s controversial carbon dating.  Mark Antonacci, author of The Resurrection of the Shroud, the most comprehensive and substantive book ever written on the subject, and Art Lind, a retired physicist from McDonnell Douglas Aerospace and the Boeing Company, have devised a series of tests and experiments that will test what they consider to be the most likely explanation of the Shroud’s images and unprecedented features, while explaining the cloth’s aberrant carbon dating. Scientific tests and experiments utilizing nuclear reactors and accelerator mass spectrometers could prove beyond a reasonable doubt that:”

Have a special Easter.

This entry was posted in Uncategorized and tagged Easter 2011, Jesus resurrection, Message to doubting Thomases, Wisdom of God. Bookmark the permalink.